The USA's Cork-born flanker John Quill became the first man to be red-carded at the 2019 Rugby World Cup as England's squad players got the job done with a 45-7 bonus-point victory on Thursday.

With a four-day turnaround after their opening Pool C victory over Tonga, coach Eddie Jones rang the changes but was rewarded with seven tries in humid conditions at a packed Kobe Stadium.

Skipper George Ford, Billy Vunipola and Luke Cowan-Dickie scored tries before the break, with winger Joe Cokanasiga grabbing a brace and Ruaridh McConnochie and Lewis Ludlam also crossing in the second half.

Quill - who qualifies to play for the Americans through his mother - was sent off in the 70th minute for a shoulder-charge to the head of Owen Farrell but his team-mates never gave up and replacement Bryce Campbell finally got them on the scoreboard after the final gong.

"It's a good win again," said man-of-the-match Ford. "We had to work for it again, the USA were a really physical, passionate team so we had to earn that win and I thought we did that very well."

USA coach Gary Gold, however, was disappointed. "You can't be missing nearly 40 tackles in a game and still hope to be in the game," he added. "It was a pretty awful performance by us tonight."

England had come in for some criticism after their untidy 35-3 win over Tonga on Sunday but they showed right from the kick-off that they were in determined mood.

US fullback Will Hooley had said ahead of the game that, while England had good players, they were not from Mount Olympus, though he may feel he was hit by Zeus himself in the opening seconds after being smashed backwards by centre Piers Francis.

That opening tackle looked borderline high but went unpunished. After waiting until the 24th minute to score on Sunday, England were quicker off the mark in Kobe, scrumhalf Willi Heinz finding Ford running a beautiful line and the number 10 went through to score under the posts after five minutes.

England then opted to kick for touch when awarded a penalty just outside the US 22 and were rewarded when Tom Curry claimed the lineout and Vunipola smashed over from the back of a driving maul. 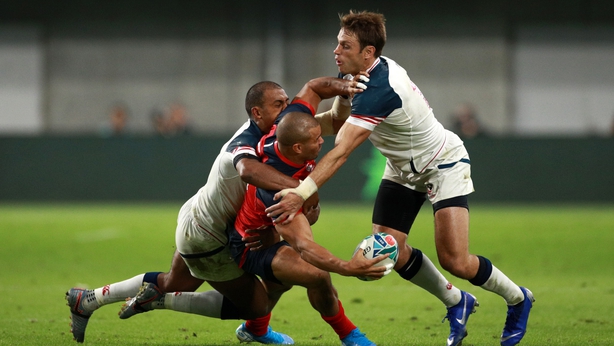 England's third try arrived in similar circumstances, the United States powerless to stop a rampaging maul before Cowan-Dickie touched down.

The stadium's retractable roof was closed for the match,meaning that while the players had to deal with stifling humidity the fans were able to create a boisterous atmosphere.

Chants of 'USA! USA!' competed with renditions of England's  anthem 'Swing Low, Sweet Chariot' while the entire crowd joined together at half-time to belt out the John Denver classic, 'Take me home, country roads'.

The red shirts of England were quickly into their stride after the break and claimed the bonus point try in the 48th minute when a rampaging Jonathan Joseph was stopped just short but Cokanasiga was on hand to score.

A raft of substitutions followed, with Ben Youngs coming onto win his 91st cap and join Jonny Wilkinson and prop Dan Cole,who had started the match, for third on the all-time England men's appearances list.

England winger McConnochie was having a quiet night but the Olympic rugby sevens silver medallist showed his sense of timing just before the hour mark, taking a pass at full pelt and bundling over for his first international try in the 15-a-side game.

England's seventh score came with four minutes left when replacement prop Ellis Genge barrelled his way through a host of tired US tacklers before Cokanasiga finished off.

England, not content, greedily went for another score after the final 'gong' had sounded but instead it was the United States who got the score, Campbell going over after an untidy, frenzied passage of play.