That was better, much better.

For all that has happened over the last nine months the message from inside the camp has remained the same.

The 'we haven't turned into a bad team overnight’ mantra followed defeats to England (twice) and Wales and has been rolled out constantly since then.

But the performance and 27-3 win, against an admittedly toothless Scotland, will have provided a much-needed boost.

For all the talk, another confidence-sapping defeat at this stage, would have been fatal to Ireland’s World Cup ambitions.

Joe Schmidt has stated that in terms of success, a World Cup semi-final, where Ireland have never been, is the mark. Today he ticked a lot of boxes.

The Springboks await in Tokyo in a probable quarter-final and to witness their raw power, speed and aggression in defeat to New Zealand yesterday was to see the game played at another level, up a significant notch from what played out in Yokohama earlier this morning.

Scotland may not have posed any real questions for Schmidt’s team but the weight of expectation, the 'anxiety', as Schmidt called it, was palpable.

The 2018 Six Nations champions, who went in to the tournament as world number one, had placed expectations on themselves.

And today they met them.

"It’s been building for quite a long time," admitted Jack Carty afterwards, "for some lads three and half years, for me a bit shorter. It was just about getting out there."

The decision to run Jordan Larmour and Andrew Conway instead of Rob Kearney and Keith Earls proved to be a good call.

It’s another tier one competitive clash for two relative novices with the experienced duo expected to be available for the upcoming fixtures.

The pack, who had been conspicuously anonymous during the above-mentioned defeats, came back to form.

CJ Stander, under pressure for his place in advance, won man of the match.

"I was sitting on the sideline talking to Tadhg Beirne thinking you never really get called on too early so I was sitting back, feet up and then Josh went down, and I was like, I gotta go," said Conan after making his World Cup debut.

"It feels good, I’m pretty tired now, it was pretty high pace, there’s a few battered bodies but we’ve started the campaign the right way and the way we wanted." 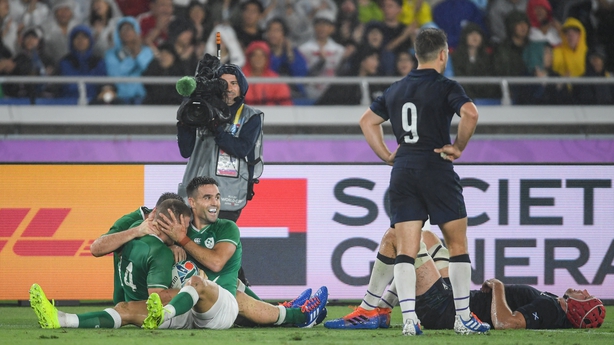 Rory Best produced the performance he needed, chipping in with a try and signing for a lineout card of 12 from 12. The 37-year-old played the entire game.

"Old man Best doing 80 minutes, which is a testament to him at 55 years of age," joked Tadhg Furlong afterwards.

"The [pack] were super," said Schmidt.

"Tadhg's try, CJ taking off from the back of the scrum, James Ryan getting over, the strength of those guys and how well they teamed up, that whole collective pack effort was outstanding and it gave us a foothold in the match."

Conor Murray and Johnny Sexton had been too quiet for anyone’s liking in the green shirt since February but both did exactly what was required today.

The scrum-half’s importance to Sexton was never more in evidence, taking on the box-kicking duties when the 34-year-old’s legs needed a rest.

Schmidt said: "They were really big for us in the pivot area with their kicking game and just their game sense, they controlled things really well for us."

A grateful Furlong agreed: "Conor was putting the ball on a sixpence and the lads were getting after them."

While Ireland’s attack, which yielded four tries, was sharp, with Jacob Stockdale, Jordan Larmour and Chris Farrell breaking the line, the effort to keep Scotland down to a measly penalty was particular satisfying, more so when Tadhg Beirne was yellow-carded.

"When we had a man in the sin-bin, it was testament to us to keep them out," said Carty, who made six of Ireland’s 131 tackles in a 22-minute run-out.

Japan are next up on Saturday but South Africa loom large on the Tokyo horizon.

"It’s full-frontal assault regardless of the casualties. They have always played like that.

"Rassie Erasmus has brought them back to what they do well and they have confidence in it. It is a different standard to what we saw [today]".

For now Ireland have six days to regroup and beating Japan will take some work, but the task at hand has been completed and Schmidt can now focus on preparing the team to peak against South Africa.

Luck of the draw for fans as club championships begin