Rory Best says his team are "delighted" but know there is room for improvement following their opening 27-3 World Cup win over Scotland.

The pack scored three of four tries as Joe Schmidt's side got off to a blistering start in Pool A.

The 37-year-old skipper played the full game in testing conditions and was keen to acknowledge the work of the backs in paving the way for their success.

"We started really well, we were positive," he said.

"We wanted to attack, when the conditions came in in the second half it became a bit more of an arm wrestle

"We know how good a team they are and we are delighted with that win.

"It was a really good combination; a couple of the tight tries came about from great play by Garry Ringrose, Bundee Aki, Jordan Larmour and Andrew Conway.

"They get us into positions, the way Johnny Sexton and Conor Murray did in the first half kicked, it leaves it easier as a pack when you are on the front foot

"We are under no illusions, that was a good start for us but we know and Joe and [Andy Farrell] and the rest of the management team will show us tomorrow how much we need to improve going forward." 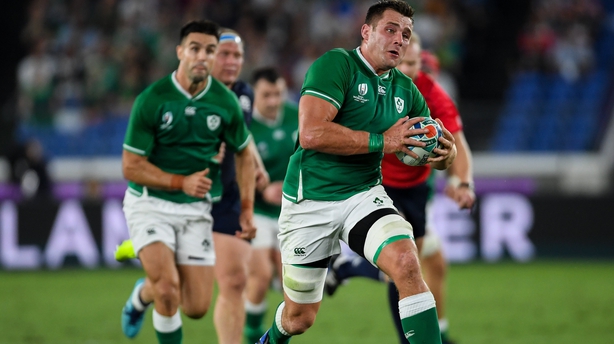 Man of the match CJ Stander, who made 43m from 15 carries, said: "We love it when it gets a bit wet.

"Thanks to my family, who kept on supporting me and the team. The team played well and I'm looking forward to the rest of the tournament with the boys.

"We'veput a lot of effort in in the pre-season, we've trained well and, look, it's just the start. We can't look back on that [match] too much 'cos we are playing [Japan] in six days' time."

Luck of the draw for fans as club championships begin