Manu Tuilagi powered England to a winning start as their World Cup was launched with victory over Tonga but the statement performance sought by Eddie Jones failed to materialise.

Tuilagi plundered two first-half tries at the Sapporo Dome after repeatedly forcing a path through the Islanders' defence to emerge as the otherwise ragged 2003 champions' most potent threat.

The Lions powerhouse has been used sparingly by Jones, whose only focus has been making sure he is at his most effective in time for Japan following years of injury-induced misery and in the northern island of Hokkaido he was magnificent.

But around him England struggled to subdue spoiling and tactically astute opponents who recently leaked almost 100 points to New Zealand, albeit in a warm-up match with nothing at stake.

It took until the 77th minute to secure the bonus point as Jonathan Joseph wriggled into space and sent Luke Cowan-Dickie sliding over, but it was the only highlight of a disjointed final quarter.

The match ended with Tonga pouring forward in search of a deserved try and they will be emboldened by their success in frustrating England's strongest available side.

Henry Slade made his comeback from a knee injury but he needed treatment after going down and was later involved in an exchange of views with Elliot Daly over a botched chance.

Slade came on for Jonny May, who departed with what appeared to be a hamstring injury.

From the start England's pack were met with a wall of red shirts but out wide they created openings with ease as Sam Underhill and Tuilagi roamed into space.

In a rare sight, Billy Vunipola was sent hurtling backwards by openside Zane Kapeli and the Tonga bench celebrated the tackle with pumping fists, but Tuilagi later evened the score by flattening Sonatane Takulua.

Owen Farrell, who ended the game kicking 15 points, and Kurt Morath exchanged penalties and as the first quarter came to an end, England were struggling to generate momentum against opponents who were playing a smart gameplan. 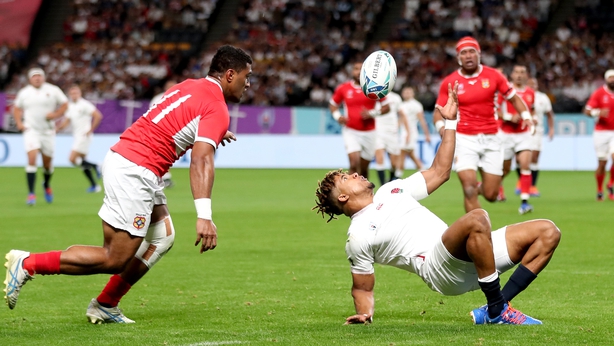 Underhill appeared to have rolled over the whitewash after Tuilagi had rampaged behind enemy lines only for Siale Piutau to squeeze beneath the ball, but a try was imminent and it arrived from its most likely source.

A scrum 20 metres out gave Tuilagi the platform to attack and the Leicester wrecking ball barged his way over with the TMO this time awarding the try.

England's bizarre attempt at dealing with the ensuing restart incurred the wrath of Jones, who slammed his desk twice in frustration.

Any anger subsided quickly, however, as Courtney Lawes stepped his way through heavy traffic to start an attack that accelerated through the gas of Daly and May and ended with Tuilagi strolling in for his second.

Having entered half-time 18-3 ahead, England began to lose their way and the scrappy flow to the game played into Tonga's hands.

Even Tuilagi dropped the ball as he was launched once again, but the lack of impetus was in part due to the vast number of changes made by Jones, including the arrival of Slade at full-back.

A driving line-out bolstered by arriving backs arrowed over the whitewash in the 58th minute with Jamie George touching down and when play resumed Jones had used his entire bench except Joseph.

On came Joseph and with him the bonus point as he created the opening for Cowan-Dickie to touch down under the posts.