Japan launched Asia's first Rugby World Cup with a victory the host nation craved as they beat Russia 30-10 at Tokyo Stadium in Ireland's Pool A.

Four years after causing the World Cup's biggest shock by beating South Africa, Japan again took centre stage, but they were made to work hard by an unheralded Russian outfit.

Russia, making a first appearance on rugby union's global stage since 2011, led for most of the first half following wing Kirill Golosnitskiy's early try, but hat-trick hero Kotaro Matsushima sparked Japan into life.

The elusive wing claimed a try double before the break, then flanker Lappies Labuschagne dealt Russia a major blow by collecting an opportunist touchdown early in the second half.

And it was Matsushima who secured a bonus point when he completed his hat-trick 11 minutes from time, while fly-half Yu Tamura kicked two penalties and a conversion, with Rikiya Matsuda converting the final try.

Russia could not add to Golosnitskiy's try, apart from Yury Kushnarov's conversion and penalty as Japan confirmed a winning start.

Joe Schmidt's Ireland get going on Sunday morning against Scotland. 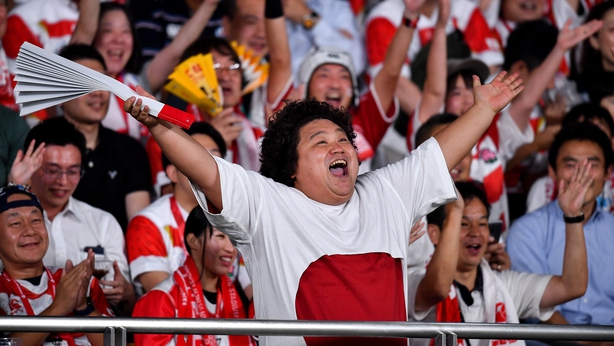 Japan full-back William Tupou made a hash of collecting a kick inside his own 22, and Golosnitskiy capitalised on his hesitancy to claim the competition's opening try, with Kushnarev converting.

Russia, ranked 10 places below their opponents in the world rankings and coached by Welshman Lyn Jones, showed no sign of nerves as they looked to rattle Japan through some strong early ball-carrying.

Russia posed plenty of questions, but Japan found an answer seven minutes later when some slick handling among their backs produced the required result when Matsushima finished impressively.

Errors, though, continued to abound in stamina-sapping conditions that saw players from both sides regularly taking on water.

Matsushima was denied a second try when replays showed the ball slipped agonisingly from his grasp as he crossed Russia's line, but he made amends four minutes later by breaching the opposition defence, with Tamura's conversion giving Japan a 12-7 interval advantage. 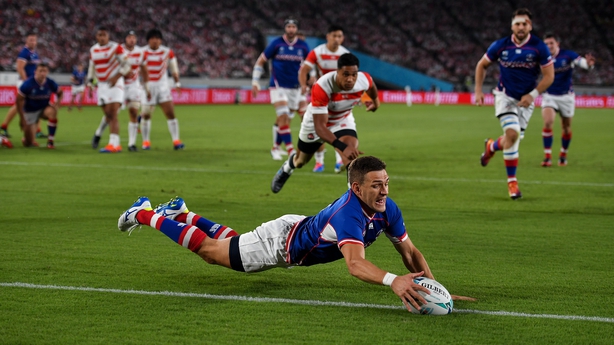 A Tamura penalty early in the second period extended Japan's lead, before Russia began to show signs of creaking when Labuschagne galloped clear on a 35-metre run that confirmed his team's third try.

Kushnarev and Tamura exchanged penalties during the final quarter, with 26-year-old Matsushima then finishing as he had started with another score to confirm a memorable contribution on the competition's opening night.