There are fears that Paul O'Connell may have played his last game for Ireland after being stretchered off during Ireland's Rugby World Cup Poold D win over France.

O'Connell suffered an apparently serious hamstring injury following an awkward tackle just before the half-time whistle blew. He left the field on a motorised stretcher wearing an oxygen mask. Ulster’s Iain Henderson came on to replace him and delivered a barnstorming performance.

"Paul is the one who worries me most. It doesn't look great with Paul."

"I suspect it probably is," Ireland head coach Joe Schmidt said when asked if O'Connell's World Cup was over and with it his Ireland career.

"He looks pretty uncomfortable at the moment and I'd say we'll get a scan on his hamstring later tomorrow. We are going to have to wait for some swelling to go down; and that's probably the same thing for Johnny Sexton and Peter O'Mahony.

"Paul is the one who worries me most. It doesn't look great with Paul. It's an upper hamstring. We'll wait until Monday for the scan and the inflammation to go down.

"Johnny looks like an abductor to me. That's not a learned eye of a medic so we are probably going to get Johnny scanned on Monday.

"Johnny was already talking about next week in the changing room but I'm not sure if that means he'll be playing or not.

"Pete didn't seem too bad so we're hopeful with Pete. I think it's a twist of the ankle or knee but he was walking pretty well in the changing room. Hopefully he'll be okay."

Schmidt continued:  "I'm incredibly proud of the performance. The challenge grew more complicated when we lost Johnny, Paul and Peter - that's 200 plus caps and it does make it a challenge.

"We had to fight for everything we got. We were maybe a bit wasteful in the first half, we created some good opportunities and didn't finish.

"To be ahead at half-time gave us confidence and I was delighted with how the players clawed their way forward in the second half.

"It was an attritional battle but a battle that showed a lot of character in the side."

Out-half Sexton was the first player to retire hurt from a brutally physical confrontation.

Back row O'Mahony and second centre Keith Earls also had to be helped from the field and are now doubts for next Sunday's quarter-final against Argentina back in the Welsh capital.

Sexton, who France warned was in for a tough afternoon, vomited on the pitch and looked badly shaken as he came off following a blockbuster tackle from Louis Picamoles. 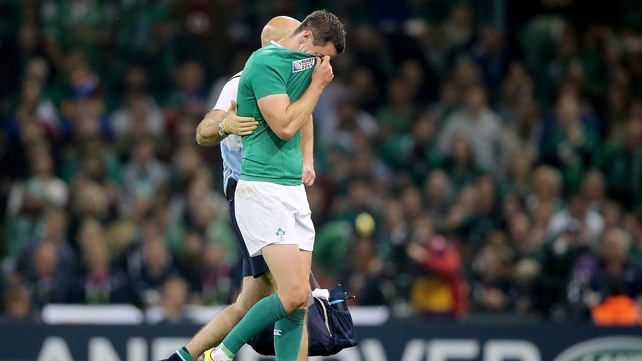 In the second half O'Mahony, who put in an awesome display, suffered what looked to be a serious ankle injury.

And then centre Earls was taken off injured, adding to manager Joe Schmidt's worries ahead of next weekend's clash with Los Pumas.

Sean O'Brien is facing a suspension too after landing an off-the-ball fist on the stomach of Pascal Pape, which was caught on camera.

Referee Nigel Owen didn't see the incident so the citing commissioner is likely to be called into action.

With injuries mounting Ireland could scarcely do without one of their best ball-carriers and Schmidt is expected to call up a number of players to his squad as cover in the run-up to the quarter-final.

O'Connell took over as Ireland captain following Brian O'Driscoll's retirement at the end of last season.

He has been an inspirational leader for his country and Munster, with whom he has won two Heineken Cups, for nearly a decade and a half.

He made his provincial debut in August 2001 and six months later earned his first cap in an Ireland jersey.

Since then he played 175 times for Munster and 108 times for his country, and also captained the Lions. His international career highlight came with 2009's RBS 6 Grand Slam.