Skipper Jamie Heaslip has praised the huge Irish support in London to watch Ireland secure a bonus-point win over Romania.

A Rugby World Cup record of 89,267 was present at Wembley Stadium to watch the 44-10 win which sees Ireland back on top of Pool D.

Heaslip said the crowd were a source of inspiration for the team and that the players were 'humbled' by such massive travelling support.

"Romania made us work for it, definitely," he explained. "We’re really glad to come away with a win – the support here was amazing and they helped us get the win.

"From last week to this week, and the last few weeks playing the summer internationals, the support was amazing.

"To have this 90,000-plus stadium full of Irish people is pretty humbling and we hope it just keeps coming."

With wins over Group D minnows Canada and Romania under their belts, Ireland now face into stiffer tests against Italy and France over the next two weekends.

Two more wins would see them top the group, though Heaslip says that no one in the camp is thinking that far ahead.

"We’re just focused week-by-week on the game that’s ahead of us," said the stand-in captain, who took over from the rested Paul O'Connell for the day.

"That’s all that we can control and plan. This was another week we focused hard and it was a chance to wear the jersey in front of another big crowd. We'll go hard again next week."

Keith Earls was man of the match scoring two tries while Tommy Bowe also crossed the line twice on the other wing.

The only blot on the copybook was a late try conceded, when Romania's Ovidiu Tonita touched down.

Earls had to go off to be checked for concussion, though he did come back on and afterwards he said he was feeling no ill-effects.

"I was fine," said the Limerick utility back. "I just took a bang to the neck in the fist half I ran into one of their forwards, poor technique from me, but all’s good. Head’s fine, just a jar of the neck."

Earls was modest about his own performance, saying that the players inside made him look good, though he said he was intent on becoming indispensable to head coach Joe Schmidt.

"I’m concentrating on what I'm doing, I’m looking after myself, I'm healthy and I'm keeping the head down. I want  to play every week," he said.

"All the boys were good today so all I can do is go out and play to the best of my ability." 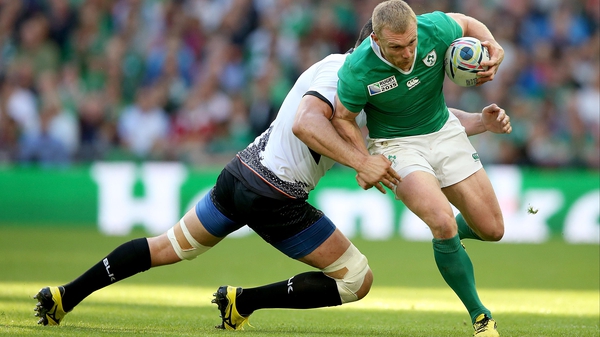 Ireland wear down Romania in front of record crowd