Sean O’Brien is a “leader of men” and won’t be distracted by captaincy duties, according to Ireland coach Joe Schmidt.

The Leinster flanker, 28, was named as skipper for Ireland’s World Cup warm-up game against Scotland at Lansdowne Road this afternoon (5pm) in his 35th cap as Schmidt made 14 changes to the team that beat Wales last weekend.

“I think he is a leader of men and he will be the ideal man come the tough moments where he will be as competitive as anyone else on the pitch,” Schmidt told RTÉ Sport.

“I think it’s that we wanted to take the pressure off some other players. Sean is probably more comfortable in his skin and in the team.

“He actually finished the Six Nations with a very strong performance so he probably won’t feel the pressure as much as some other players who could have been given that responsibility.

“I think it’s also the respect he has in the group. He’s certainly a guy who puts his body on the line and leads by example. That’s probably two of the contributing factors to him being named as captain.”

With just over a month until Ireland's opening pool game against Canada in Cardiff on 19 September, Schmidt had updates on injury concerns over prop Cian Healy (neck) and winger Andrew Trimble (foot).

He said: “Cian, it’s week to week and we’re still hoping that potentially he might have a hit out against England [on 5 September].

“If he doesn’t and he’s heading in the right direction and there’s some real confidence around him being right prior the tournament then we’ll have to make a decision then based on the best advice we can get.

“Physically, you can see that he’s starting to get into match shape again so that’s promising for him and for us. We’re hopeful on that front.

“Things have settled down [with Andrew] and it’s showing a reasonably good picture. There’s is bruising there that’s uncomfortable. We’re hopeful that in about 10 days’ times he’ll be training fully.” 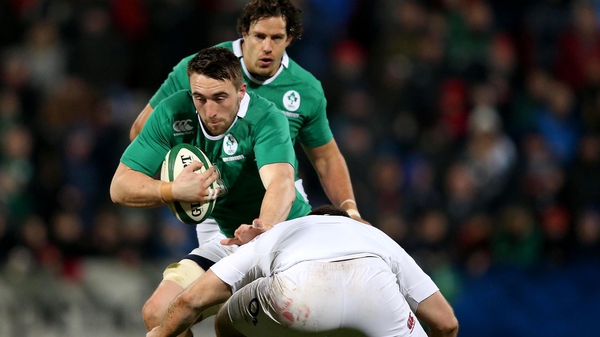