Ireland have beaten Italy the last 15 times the two sides have met but during the golden era of Italian rugby, Ireland lost three matches in a row.

The rugby playing history between the nations is not long – comprising just 19 matches, the first in December 1988. Ireland won that one 31-15 and the sides did not meet again for seven years.

Ireland lost that match in Treviso and were then beaten twice in 1997, once in Bologna and once at Lansdowne Road. The sequence ended with a 39-30 victory in 1999.

The losses took place during dark days for Irish rugby. A quasi-amateur team routinely getting beaten from pillar to post in the Five Nations had the odd rousing win over England and a bizarrely good record away from home against Wales to cling to.

Conor O’Shea played full-back in several of the 1990s clashes, scoring two tries in the 1999 victory, but the 1997 away match stands out for off-field reasons as much as anything. Safe to say that the IRFU was not the slick operation it is today.

"We went to Bologna to play Italy. I didn't play in that game but my abiding memory is of waiting for the team bus to arrive to bring us to the match and it never turning up," says O'Shea.

"We were on the side of the road hailing taxis to try and make the match. So I think in terms of professionalism things have moved on a little bit since then!" 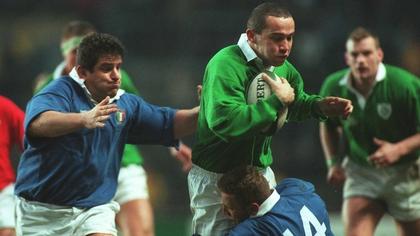 But Italy were a side to be reckoned with at the time and were arguably unlucky to be brought into the Six Nations just as a great side was coming to the end of its run.

The familiar strong pack was a major factor in the three Italian victories but the Azzuri also boasted a group of high quality backs. Diego Dominguez is the most often cited, but there were others.

Marcello Cuttita, the record try-scorer with 25 touchdowns, was part of the 90s team, along with the great Argentina-born out-half Diego Dominguez and current Italy manager Carlo Cecchinato, who played at number eight.

"Alessandro Troncon and Diego Dominguez, when they were young, were an outstanding half-back pair. There were the Cuttita brothers – Massimo and Marcello – one was on the wing and the other was a prop," continues O'Shea.

Many Ireland fans will remember Cristian Stoica who, like Troncon, solidered on with Italy until the mid-2000s. He still plays club rugby for Montpellier. Paolo Vaccari, a full-back who played at three Rugby World Cups, was one of the best.

"Stoica was a young man at the time and he was a really powerful strapping cente. The full-back Paolo Vaccari was another, he was just an outstanding rugby player. These guys could really play, especially Vaccari."

"In the forwards they had players like the Australian Julian Gardner in the back-row along with Carlo Cecchinatto; they were some pretty tough blokes.

"They have maintained the strong pack but they lost a lot of the cutting edge they had in the backs."

"They had some outstanding players and were introduced to the Six Nations at the end of a golden era for Italian rugby. In terms of Irish rugby it wasn’t an outstanding side."

The losses were not expected by the public in Ireland, despite the struggles in the Five Nations.

"(Losing) was a shock to people at home. But people do not always give credit to the teams Ireland are playing against. It was a great, great era for Italian rugby. The pack retains that, but the backline does not have the same quality." 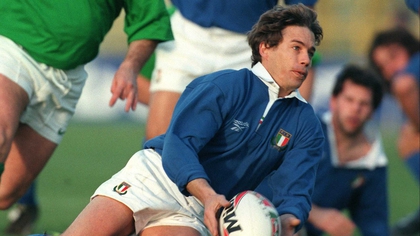 The mini period of Italian dominance ended quite suddenly. Just as Italy were developing the habit of beating Ireland, the game was transforming here. Ulster won the Heineken Cup in 1999 and while they failed to build on that success, the thrilling exploits of Munster over several years gave Irish rugby an engine. The arrival of Brian O’Driscoll added a turbocharger.

The ‘five debutants’ match against Scotland in 2000 – which also included a recall for Mick Galwey - marked the end of the try-hard Ireland of the 90s.

Ireland have won all 15 meetings since 1999, including every Six Nations clash since Italy joined the competition the following year.

But Italy have had their near misses and should have had their first ever Six Nations win over an out-of-form Ireland in this year’s competition – only a late Ronan O’Gara drop goal saved the day. The 2007 RWC warm-up in Belfast should also have been an Italy win, only a dubious late O’Gara try denied them.

Since 2002, Italy have benefited from having their own totemic figure in Sergio Parisse. Capped at the age of 18 against the All Blacks in 2002, it is worth repeating that he is still just 28.

Other top Italian players have had increased top level exposure, mostly in the French League, and the addition of Italian clubs to the Rabodirect Pro12 (formerly Magners League) will continue to help the national side develop.

Like Ireland in the 90s, the Italian game is set for a much needed boost.

O’Shea adds: "Professionalism made Ireland and Italy struggled. They don’t have the playing pool but we are going to see them gradually get stronger."

"With the entrance into the Rabo League we are going to see Italian rugby prosper because they have the financial wherewithal and the will, and they now have the competitive environment to improve."

Ireland have 15-in-a-row but they will be lucky to continue that run much further as Italy are surely due their day in the sun.

Declan Kidney and co will not begrudge them that when it comes – so long as it is not this Sunday.