Paul O'Donovan and Fintan McCarthy have added more gold to their collection after comfortably claiming another gold medal for Ireland in the lightweight men's double sculls at the World Rowing Championships in Racice, Czech Republic.

The pair were last after 700 metres but, as usual, they were simply getting into their stride and they comfortably pulled away from the competition to finish well clear.

It was a fifth World gold for O’Donovan with the pair adding to the gold secured at the Tokyo Olympics.

Margaret Cremen and Aoife Casey have claimed a brilliant bronze for Ireland in the lightweight women's double sculls at the World Rowing Championships after a terrific battle with France.

Great Britain were clear of the field throughout as they eased to gold, with America taking silver. It was the race for third that provided the drama with Ireland and France switching positions numerous times before the Irish team prevailed.

The Irish pair were out strong over the first 400 metres and were well positioned, but the field remained a tight one.

Competing from lane two, they moved into second by the 700-metre mark but were starting to tire due to those early exploits.

That allowed America to power past while France also moved ahead, with Ireland down to fourth by 1200 metres.

But just went it looked like they were losing ground, Cremen and Casey found renewed strength to go toe-to-toe with France with the Irish duo managing to shake them off as the line approached for a brilliant medal win.

Speaking afterwards to RTÉ Sport, the pair were naturally delighted with their podium finish, with Casey saying: "We were trying to race the best race we can. We were focused on the process. Those last few strokes were the longest of my life. I really can't believe it, it's unbelievable."

Cremen added: We always say the races were like battles, you have to be more mentally strong than physically strong. We knew from the semi that hope was all we needed was hope and the hope took us home."

Of course edging out the French boat for a medal, a combination that took silver in last year's Olympics, was also sweet.

"Going back to last year we watched that final, it was a wish, a dream to be there at the next Olympics," said Casey.

"If you told me in 12 months I'd be here with a bronze medal I wouldn't have believed you. We gave everything to cross that line, we couldn't have given any more."

The Irish pair of Katie O'Brien and Steven McGowan missed out on a medal in the mixed double sculls final.

They were fourth last year in the European Championships, but were unable to improve their position in a competitive field that was ultimately won by Ukraine.

Ireland never looked like challenging for a medal as the Ukrainians and Poles vied for pole position.

Whilst halfway through the Olympic cycle, there is hope that they can improve before the championships in Paris 2024.

O'Brien won gold on Friday in the final of the PR2 single sculls.

The women's four finished a disappointing sixth in their final with the team of Aifric Keogh, Eimear Lambe, Fiona Murtagh and Emily Hegarty never really contending at any stage.

The Olympic bronze medallists finished second in their semi-final and would have had high hopes of a competitive performance, but they finished over 12 seconds behind winners Great Britain.

Earlier on Saturday, Natalie Long and Tara Hanlon just missed out on first place in the women's double B final.

Their pair clocked a time of 07:12.84, just behind the 07:12.29 mark of Czech Republic duo Radka Novotnikova and Pavlina Flamikova.

Ireland also had to make do with second in the men’s four B final with Germany narrowly edging them out.

The team of Jack Dorney, Nathan Timoney, Ross Corrigan and John Kearney were tracking Poland – who led at the 1500m marker – for the majority of the race, before finishing strongly to overtake them, only to see Germany do likewise. 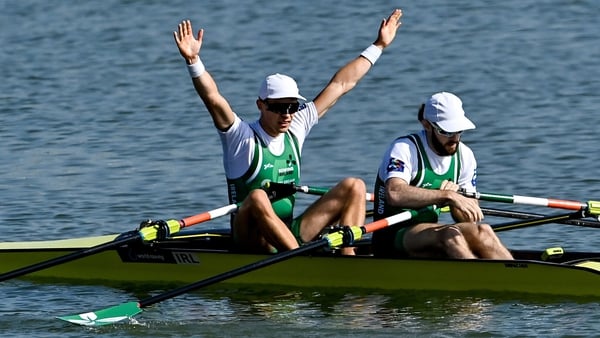 Trust key to gold for McCarthy and O'Donovan