Skibbereen Rowing Club captain Sean O'Brien has hailed the brilliance of lightweight double sculls crew Paul O'Donovan and Fintan McCarthy and said there's something "exceptional" about O'Donovan's physique that lifts him above the rest.

The pair delivered gold for Ireland at the European Rowing Championships in Munich on Sunday with a superb final performance.

It's another gold medal for their collection after the duo triumphed at the Worlds in Ottensheim in 2019, the European Championships in Varese in 2021 and at last year's Tokyo Olympics.

There's something in the water in West Cork, an area that keeps on producing exceptional rowing talent.

"They’re brilliant, a great ad for Ireland, there’s no doubt about that," O'Brien said of his fellow Skibberreen men when speaking on RTÉ's Morning Ireland.

"Without trying to be blasé about it, we actually do (expect gold when they race). It is what we expect every time now at this stage. They seem to be unbeatable.

"It’s great for the profile of the club. The membership and young people coming into the club has increased immensely."

O'Donovan has an unusually high lung capacity and a long stroke - two of the ingredients that mark him out as truly elite.

"There's something exceptional… they did a lot of tests on Paul and they found him to be a fairly unique character," O'Brien added.

"They’re the ideal partnership, it just clicks of them. There’s a lot of luck involved to get the right two people in the boat together.

"They love it every day. They make it look easy, there’s no doubt about it, but it’s not easy."

O'Brien also highlighted the feats of some of Skibbereen's female rowers: Lydia Heaphy was just outside the medals in the women's lightweight double with her partner Margaret Cremen; Aoife Casey was fourth in her lightweight single sculls final; and Emily Hegarty finished fourth with Fiona Murtagh in the women's pair final.

They are all on the rise.

"But our ladies in the club are increasing at a pace all the time. We had three of them in the A final for this European Championships: Lydia, Aoife and Emily. They’re not far off the pace at the moment.

"The next big one for us is on 18 September in Czech Republic for the World Championships." 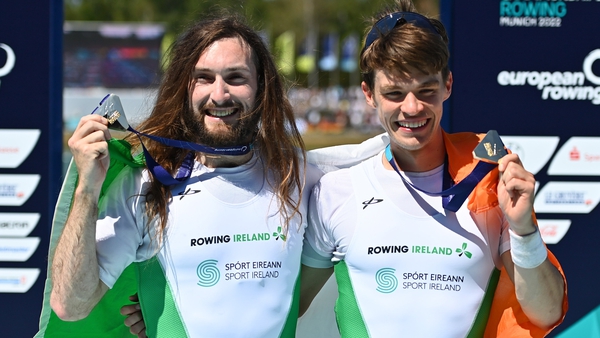