World Rowing has confirmed that owing to concerns over the COVID-19 pandemic, the remaining Olympic qualifying regattas, as well as World Cup III, have been cancelled and won't be rescheduled.

Like other sports, including soccer, FISA, rowing's international federation, are expected to offer an update on how places will be allocated for the games in Japan on St Patrick's Day.

"With the outbreak of COVID-19 (Novel Coronavirus), the quickly growing number of cases now reported worldwide, the government actions to attempt to contain the transmission of the virus make it very difficult and unadvisable to stage international competitions during the months of March, April and through to May 2020," they confirmed in a statement.

"The health and safety of the athletes and all other participants, including the general public as well as taking responsible and necessary measures to manage the spread of the virus, are the priorities of all parties involved in running international rowing events.

"FISA and the respective Organising Committees (OCs) have been in regular contact since the outbreak began. In all calls, the latest information and recommendations from the World Health Organisation, other international health experts and the decisions of government and health authorities of the participating nations have been reviewed and discussed in detail.

"All have realised the multitude of issues that would prevent teams from travelling now, during April and foreseeably during May, including the travel restrictions being imposed by an increasing number of national authorities, mandatory and voluntary quarantine periods, and lack of medical coverage for coronavirus in some countries.

"The next communication will take place on Tuesday, 17 March 2020." 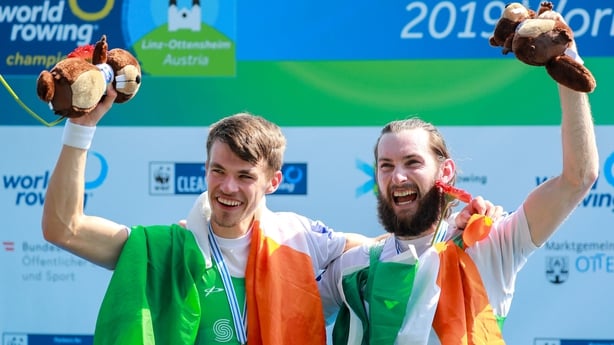 Team Ireland's rowers are currently training at the National Rowing Centre in Cork, with all other athletes being asked to stay away since last week.

In rowing it is the boat, rather than the rower, that qualifies for the Olympic Games, and four of Ireland's boats having already booked their places in Tokyo.

They were rowed by Sanita Puspure in the single skulls, and the men's lightweight double of Fintan McCarthy and Paul O'Donovan, who both won gold medals at last year's World Championships in Austria.

The men's double skulls of Ronan Byrne and Phil Doyle took a silver medal at the same event, while Aileen Crowley and Monika Dukarska finished second in the women's pair B final to also secure qualification.

In a statement Rowing Ireland said: "This is significant for Rowing Ireland and its athletes as it was hoped that the Women's Four and Women’s lightweight Double would qualify at this last chance regatta scheduled for end May 2020.

"The Women’s Four narrowly missed out on the opportunity to qualify last year at the World Rowing Championships in Linz due to lane allocation and prevailing wind.

"Rowing Ireland awaits more information from World Rowing as to if and how the remaining places will be allocated following ongoing discussions with the International Olympic Committee.

Following the announcement Rowing Ireland chief executive Michelle Carpenter said, "We are working with World Rowing at present regarding the allocation of final places for the Tokyo 2020 Olympics.

"This will be disappointing for all our athletes as in the sport of rowing it is the boat that qualifies and not the athletes. These athletes are dedicated to getting to the Olympic games and representing Ireland, and we are doing everything at present to support them in these challenging times".