Gary and Paul O'Donovan took the gold medal at the World Rowing Championships in the men's lightweight double sculls.

They were well placed throughout and burst into the lead with 500m of the 2km course to go, finishing comfortably ahead of the second-placed Italian crew.

Following an unusually slow semi-final performance, when they just about squeezed into the final in third, the O'Donovans had a poor draw and started in lane six.

The Italians took the race on early with the Irish pair stalking them and at the halfway point the Skibbereen men started to draw level. 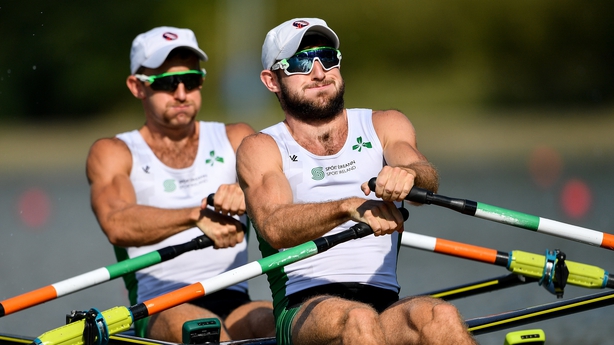 "When the Italians go ahead of us the very last thing we want to do is panic; that would only make things a lot worse," said Gary, speaking to RTÉ Sport immediately after the race.

Paul added: "The race is long and we’re still within touching distance so there was never any panic. Even though they were ahead we were happy with our own start."

Earlier Emily Hegarty and Aifric Keogh found the going tough in their first major final as a crew, finishing sixth and last in the women's pairs medal race at the World Rowing Championships.

Hegarty and Keogh had won their semi-final and were hoping to contest the bronze medal position, with Canada and New Zealand the run-away favourites for the top two spots on the podium.

But from the off in the final at Plovdiv, Bulgaria, it was clear that they were struggling and they quickly found themselves at the back of the field.

They finished strongly in their semi-final, though they weren't able to produce a fast finish here.

It's a gold medal for Gary and Paul O'Donovan at the World Rowing Championships with a dominant performance in the men's lightweight double sculls. #PullLikeADog #RTESport pic.twitter.com/S8xST0pT0g

Canadian pair Caileigh Filmer and Hillary Janssens took gold ahead of New Zealand's Grace Prendergast and Kerri Gower, who will be disappointed to have been beaten given their form all season. Spain's Anna Boada Peiro and Aina Cid, who were fifth at the Rio 2016 Olympics, took bronze.

Despite this result, Hegarty and Keogh will be looking at the positives with Tokyo 2020 two years away.

There are two more Irish crews in finals action on Sunday.

Outgoing lightweight men’s pair world champions Shane O’Driscoll and Mark O’Donovan placed fourth in the C final of the heavyweight men’s pair behind Australia, Poland and USA in that order.

The race gave the Irish men, who are still in the early stages of transitioning to heavyweight, a 16th place ranking in their category in a field of 23 international boats.

The last Irish race of the day saw Denise Walsh and Aoife Casey win the C Final of the lightweight women’s double and finish 13th overall at the world championships event.

Watch live coverage of Ireland's two crews in World Rowing Championships final action on Sunday from 9.50am on RTÉ2, with reports and reaction on the RTÉ News Now and and online at RTÉ.ie