The 2016 Census recorded just 2,691 souls living in Skibbereen, and yet on Sunday morning last, the picturesque West Cork town found itself in the eye of a storm of unprecedented success.

It started with Mark O'Donovan and Shane O'Driscoll blazing to gold in the European Championships lightweight pair final, a stunning performance that would prove only the start of a frantic day of celebration.

Next up was Denise Walsh, the 24-year-old single sculler surging to silver with the roars and whoops of her clubmates Paul and Gary O'Donovan echoing across the Czech Republic waters as she crossed the line.

Then came the Rio Games silver-medallists, the star attractions, and they kept the good times coming with a gutsy runner-up finish to the French.

Three races, five medals - it was an astonishing performance from Team Ireland.

In 1967, all but one member of Glasgow Celtic's 15-man European Cup-winning squad was born within 10 miles of Celtic Park.

Skibbereen's rowing success can also point to the close proximity of those involved - and their education on the River Ilen.

In an area where GAA, rugby and soccer also compete for the hearts and minds of both young and old, Skibbereen Rowing Club has been an integral part of the community for close on 50 years.

Secretary TJ Ryan charted the club's history in the aftermath of that medal haul at the Europeans.

He told RTÉ Sport: "The club was formed in 1970. We evolved from the West Cork-South Kerry Rowing Association which involves all the coastal clubs in Bantry, Castltownbere, Sneem and Killarney. In time all the clubs affiliated en block.

"The first notable success we had was when Nuala Lupton rowed internationally in 1976.

"In the 1980s we picked up another gear with Dominic Casey and Lar Collins and then Eugene Coakley and Timmy Harnedy got to the final of the lightweight quads at the 2004 Olympics before they won a silver medal at the Worlds the following year.

"Richard Coakley then competed in the lightweight quads at the Beijing Games three years later.

"To date, the club has won 163 Irish National titles."

And then came that day last August when the O'Donovan brothers claimed a lightweight double skulls silver medal in Rio - Ireland's first Olympic medal in the sport of rowing.

It was an emotional day for Ryan.

"The new oars acquired by coach Dominic Casey certainly played their part in my opinion. I knew the boys could win a medal after they eliminated the Italians in the semi-final. Their times were very good.

And while the O'Donovan brothers celebrity status scaled new heights after their medal success in Brazil, the club, not surprisingly, has also benefited, with Ryan adding: "Membership of the club has doubled since last August. We now have well over 100 active members.

"Role models are important in sport. We have had the Oakley brothers and Timmy Harnedy and then came Paul and Gary O'Donovan. In the weekend just past, Mark O'Donovan, Shane O'Driscoll and Denise Walsh have stepped up. 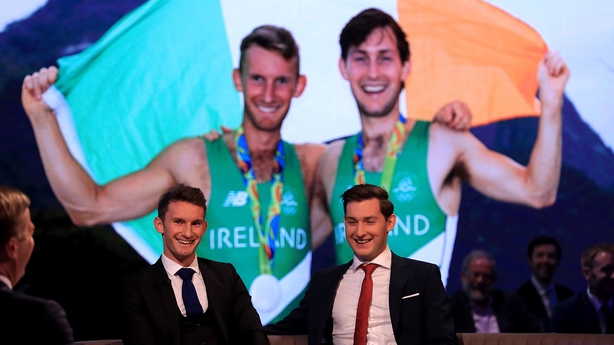 "Rowing is in the Skibbereen DNA. A lot of the credit must go to Dominic Casey for shaping the golden age we are currently experiencing.

"There is much to look forward to with future Europeans and Worlds to come, and there is also Tokyo 2020."

Ryan also praised RTÉ for their coverage of the weekend's action in the Czech Republic.

"I think outside of the Olympics, it was the first time that RTÉ has covered rowing live," he revealed.

"It's great to get the coverage and it certainly will help rowing's profile.

"I don't know the cost involved, but for RTÉ to be present when medals were won added to what was a great occasion."