Mouse Morris is no stranger to winning big pots and hopes to ink a thus-far elusive Paddy Power Gold Cup victory on his impressive CV, when saddling French Dynamite in Cheltenham's Saturday showpiece.

For all the Irish success at the Festival meeting, raiders from the Emerald Isle have not fared well in the two-and-a-half-mile handicap chase in recent times.

The seven-year-old has won two of five starts over fences and had a successful tune-up over hurdles on his seasonal bow at Thurles.

The Fethard handler feels he is more than capable of taking the step up in class.

"He's ready to go and this was the plan before he went to Thurles," said Morris. "It was a nice run over hurdles and we've been happy with him since.

"It will be his first time in a handicap, so to speak. He did finish third in Punchestown (in April) but that was a novice handicap (chase).

Ga Law, winner of the Rising Stars Novices' Chase at Wincanton two seasons ago, spearheads a strong challenge from the home guard.

Off the track following a runner-up effort in the Grade Two Pendil Novices' Chase at Kempton in February last year, he made a promising return after 603 days off when finishing a close-up third to Riders Onthe Storm in the Old Roan Chase at Aintree last month.

Trainer Jamie Snowden is hoping the race does not come too soon for the six-year-old.

He said: "It is a big test. He was a very good novice a couple of years ago and won the Rising Stars and was placed in a Grade One (Henry VIII Novices' Chase at Sandown) and Grade Two with a penalty.

"He picked up an injury on the back of that and had a wonderful comeback run in the Old Roan when third and only got beaten a length and a half.

"Obviously, he will improve mentally and physically for that. This is another step forward in a big-field handicap, but he is in great order and I couldn't wish for him to be in better form.

"I suppose the one doubt is it is only three weeks off the back of the last run and you hope you don't encounter the dreaded bounce factor.

"He has won around Exeter and Fontwell, and ran well at Sandown, so I wouldn't be too worried about the track."

Runner-up to Vintage Clouds in the Ultima at the Festival meeting, Happygolucky gained compensation at Aintree, signing off the campaign with Grade Three handicap chase success.

Kim Bailey is hopeful that dropping back in trip will not be a detriment to the consistent eight-year-old.

He said: "We're very happy with him. He is in a good place. He is stepping back in trip, so will he be good enough? I don't know. He won't disgrace himself.

"It is not the strongest Paddy Power in the world, and I would hope he'd have every chance. We're looking forward to it."

He saddles Il Ridoto, who was third in Ayr's Future Champion Novices' Chase when last seen in April, and Simply The Betts, who has won twice at the Prestbury Park track.

Of the former, Nicholls reported on his Betfair Blog: "He had a wind op in the summer because his breathing was troubling him last season.

"Our horses tend to improve a lot from four to five and a fast-run handicap like the Paddy Power will suit him a lot better than small-field novice chases.

"He certainly seems to have progressed and he looks to have a great each-way chance over this trip which he now needs."

Simply The Betts was last seen chasing home Stolen Silver - who reopposes - in the Grade Two Silver Trophy Handicap Chase over the same course and distance in April.

Nicholls added: "He loves Cheltenham and is a lively outsider ridden for the first time by his new owner David Maxwell.

"While Simply the Betts doesn't get much help from the handicapper, I'd say he is the best we've had him.

"He looks fantastic in his coat, goes well fresh and like a lot of our recent winners he has done loads of work. He is ready to run for his life."

Former Nicholls assistant Dan Skelton is responsible for Midnight River, who gained a second chase success when opening his campaign at Stratford, powering to a 25-length victory.

"Last time was a big step in the right direction," said Skelton. "Last year we started with a fall, this year we've started with a win, so it is so much better this year and confidence is high going into this race.

"I would like it to be good to soft to give us a fair chance, but he's in great form at home and I'm liking everything he is doing. It's just a very competitive race."

Kerry Lee won the 2019 renewal with Happy Diva and relies on outsider Storm Control this time, having decided not to declare Demachine.

"Storm Control won the amateur riders' race at this meeting a few years ago during covid, when Richard Patrick was able to ride him because the amateurs were banned. That was a nice result," said Lee.

"It's a step back in trip for him, but he has won over shorter and he's incredibly well and we're happy to be having a go at it with him." 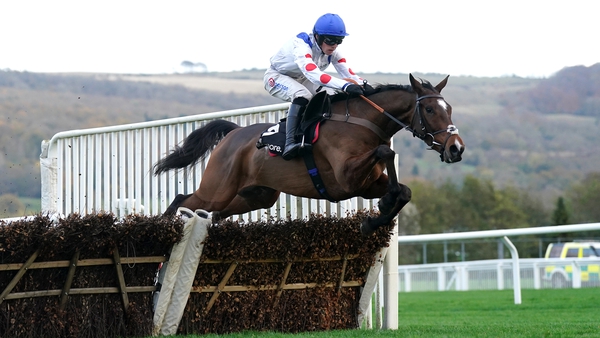