Emily Upjohn will take on seven rivals in the Juddmonte Irish Oaks at the Curragh on Saturday but her Epsom conqueror Tuesday is not among them.

The John and Thady Gosden-trained daughter of Sea The Stars was an unlucky short-head runner-up to Tuesday in the English equivalent at Epsom, having slipped coming out of the stalls for Frankie Dettori.

The same partnership will be a warm order to gain compensation in the mile and a half Classic, with Aidan O'Brien opting not to run Cazoo Oaks winner Tuesday, who ran in the Irish Derby against the colts last time out.

The master of Ballydoyle still has a strong hand, as he is responsible for three of the runners in the Group One contest.

History, a Group Three winner over a mile on her first start this year, tried a mile and a half for the first time in the Ribblesdale at Royal Ascot and was three and a quarter lengths behind the Jessica Harrington-trained winner, Magical Lagoon, who reopposes.

Harrington is similarly responsible for Fennela, who did not make her debut until April and broke her maiden at the third attempt over course and distance early last month.

O'Brien also saddles Emily Dickinson, a winner of one of her four starts this term and she drops back in trip, having finished runner-up to Rosscarbery in a mile and three-quarter Group Three at Leopardstown in her previous start.

Toy, who has been highly tried, contesting two French Group One contests on her last two outings with little success, will tackle this trip for the first time and completes the Ballydoyle trio.

Cairde Go Deo was a beaten favourite when sixth to Discoveries in the Group One Moyglare Stud Stakes at the Curragh last September, has won back-to-back Listed contests this term and bids to give Ger Lyons a second Irish Oaks success in three years, following Even So's 2020 victory.

Show Of Stars, who represents Paddy Twomey, is also tackling the trip for the first time and seeks a first win since landing a Dundalk mile maiden in November

Watch the Juddmonte Irish Oaks from the Curragh on Saturday at 2pm on RTÉ One and RTÉ Player. 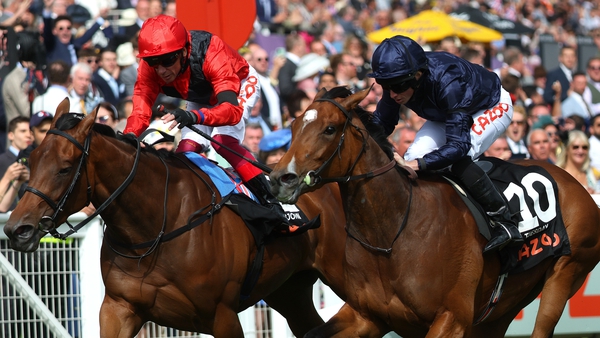