Westover turned the Dubai Duty Free Irish Derby into a procession with a dominant display at the Curragh.

Thought by many to be an unlucky third at Epsom behind Desert Crown, Rob Hornby had been replaced by Ireland's champion jockey Colin Keane for his Classic assignment.

Keane was intent on not letting the early pace-setter French Claim gain too much of an advantage in front and while Westover was tracking the pace, his main market rival, Aidan O'Brien's Oaks winner Tuesday, was dropped out by Ryan Moore.

Lionel was one of the first beaten and when Moore tried to make up ground on Tuesday, Keane asked Westover to go and win the race two furlongs out.

The Ralph Beckett-trained colt galloped clear in relentless fashion and while Piz Badile gave game chase, he was no match for the impressive winner.

A winning distance of seven lengths advertised his superiority with a further two back to French Claim in third. Tuesday came home in fourth.

Speaking to RTÉ Sport after the race, winning jockey Keane said: "Every jockey (if you ask them) what race would they like to win, it's the Epsom Derby but the second one would be the Irish Derby.

"It's great to win a home derby, it's unbelievable."

On Westover, the Meath native added: "He's a monster of a horse and he's only going to be a better horse next year."

"It's great to win a home derby, it's unbelievable"

Beckett said: "Colin was positive on him from the outset and took the bull by the horns. Rob Hornby spoke to him at lunchtime today and encouraged him to ride him that way.

"It's important that you go out with your boots on in these occasions and Colin certainly did that today. I really didn’t think he would win like that at this stage. He’s a big horse and still a work in progress. He’s going to get better with age.

"I never felt he was going to stop when he got into his stride. He drifted out a bit into the middle of the track and is still, as I say, a work in progress. I hope there is more to come with him. He has a great temperament and that shone through today.

"This was always a race that would fit in well. The track suits him and it’s wonderful to get it done. It’s a big day for us.

"He’s going to develop from three to four, never mind through the rest of the year you would think.

"We’ll discuss it with the family and everybody to see what we do next. It depends how he comes out of today. He’s in the King George and that would certainly be an option.

O'Brien was full of praise for the placed runners, but felt Tuesday is capable of better in the future.

He said: "I wouldn’t take anything away from the first three horses, but anything that sat handy stayed handy. It was probably hard with the wind to get into it.

"The winner is a very good horse, no doubt.

"There is probably more to come (from Tuesday) and hopefully she will run better the next day." 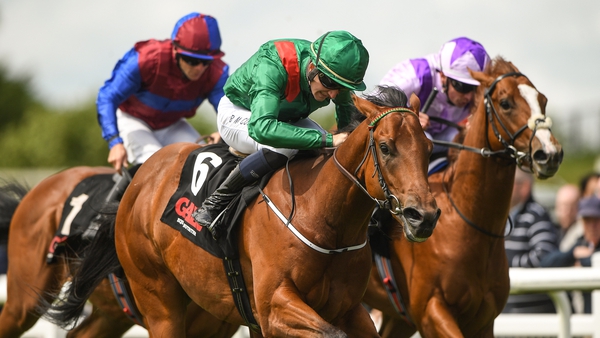