Broome swept trainer Aidan O'Brien to a remarkable 900th Group/Graded winner under both codes with an awesome display of front-running in the hands of Ryan Moore to take the Hardwicke Stakes.

Though last season’s Irish Derby and St Leger winner Hurricane Lane was sent off the odds-on favourite for the mile-and-a-half Group Two feature at Royal Ascot, he appeared to be carrying a little condition for his first run of the season on ground quicker than ideal and Moore’s aggressive tactics from a wide draw worked to perfection, as he took the sting out of Charlie Appleby’s runner.

The 6-1 chance, who landed the Group One Grand Prix de Saint-Cloud in July last year, kept grinding and as Hurricane Lane wilted. Mostahdaf and Jim Crowley gave chase, but found the winner three and a quarter lengths superior.

BROOME sweeps the floor with the competition in The Hardwicke Stakes to give Ryan Moore his 6th win this Royal Meeting. pic.twitter.com/fcAb260osE

"I didn’t realise that (900 top-level winners) and we are so privileged to be in the position we are and we are so grateful to everyone at Ballydoyle," said O’Brien, who also moved to 81 career winners at the Royal meeting – one behind Michael Stoute.

"In this life and world we take one day at a time and try to appreciate every day. We’re so grateful to do what we do every day. It’s incredible really."

Paying tribute to Moore, he said: "It was a brilliant ride. Ryan has done an incredible job on Broome. He is a six-year-old colt now and one very strange thing is that he seems to be coming to the peak of his career after all these years. He is by Australia and is very brave.

"We think we will see the best of him this year. Ryan gave Broome an amazing ride."

O’Brien indicated the King George VI And Queen Elizabeth Stakes will be the target for Broome, and added: "He suffered a fractured shin when he was kicked unsaddling after the Japan Cup.

"He had time off and needed his run in the Tattersalls Gold Cup.

"He has a very high cruising speed, and doesn’t surrender."

Appleby was satisfied with Hurricane Lane’s initial effort and feels he will make plenty of progress for the outing.

He said: "We haven’t hidden anything about what our thought processes are – we’re working back from October, very much so. This is a horse we feel is our Arc horse and today, going out there with the ground being as quick as it was, I said to William (Buick) 'don’t forget, if it’s not happening for him, look after him round there'.

"But William said he travelled into it well, his action just shortened a bit, he said he just went through his girths and just got tired.

"The ground was quick enough for him – he does move better when there’s ease in the ground – we all know that. But more importantly, he took two match-fit horses on as well. They’ve gone a good gallop – Ryan’s gone out there and set a good stall, and I’m pleased.

"It’s always encouraging – it’s the same from two to three or three to four, their first run, you’re just glad they’ve still got their enthusiasm." 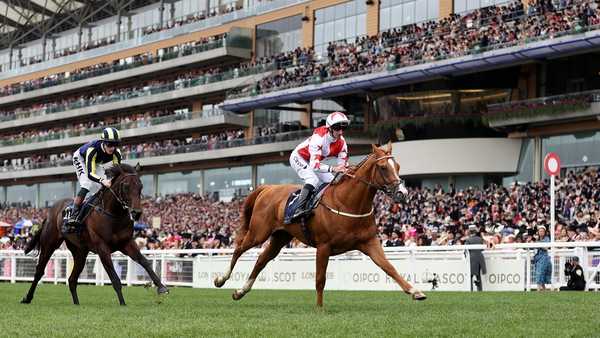