Newmarket heroine Cachet is "more likely than not" to bid for a Guineas double in the Poule d'Essai des Pouliches at ParisLongchamp on Sunday week.

Winner of the Nell Gwyn Stakes at Newmarket last month, the daughter of Aclaim returned to the Rowley Mile to provide trainer George Boughey and owners Highclere Thoroughbred Racing with a famous Classic success in Sunday's Qipco 1000 Guineas.

Highclere's managing director, Harry Herbert, was emotional in the Newmarket winner's enclosure and admitted he was still on cloud nine on Tuesday afternoon.

He said: "We don't want to, but we're coming down slowly but surely!

"It was a wonderful day for everyone involved and I still can't quite believe it."

While a final decision has yet to be made, Herbert is expecting Cachet to head across the Channel before potentially running in the Coronation Stakes at Royal Ascot.

"We're still in discussion, but we will certainly look very closely at the French Guineas," he added.

"It's up for discussion and I expect at the moment it's more likely than not, but we just want to absolutely see how she comes out of the race. She seems fine and George is thrilled to bits with her.

"I suppose with the way she races and the way she quickens, faster ground will probably suit better." 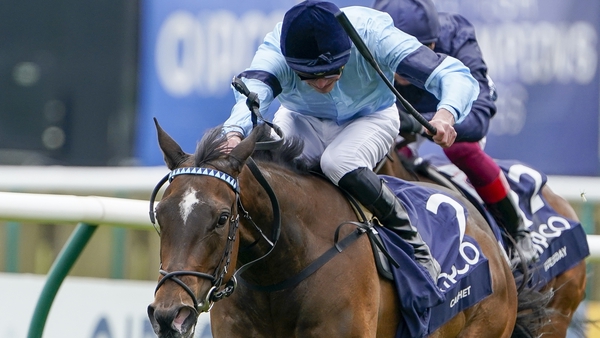