Rachael Blackmore and Henry de Bromhead capped their annus mirabilis last season when Minella Times ran out an impressive and well-backed winner of the world's most famous steeplechase.

The duo enjoyed another remarkable Cheltenham Festival and it’s likely that there is some recent bias at play in Minella Times’ remarkably short price for a repeat win in the Aintree feature.

Tiger Roll became just the seventh horse to land more than one renewal of a race first officially run in 1839 when he completed his famous double in 2019, with Red Rum (1973, 1974, 1977) the only horse to capture the race three times.

The defending champion was matched at 99-1 on the exchanges earlier in the season and his contracting price isn’t due to any form boosts or view that he remains well-handicapped.

In his favour, he is in the care of a trainer who has proven himself a master at prepping horses to peak on the big day, but most of the runners in the field have had campaigns arranged around the National and won’t have to shoulder such weight burdens.

With 'AP’ and ‘Ruby’ now retired, ‘Rachael’ has a name recognition unmatched by any other rider in the National Hunt weighing room. That has a major impact in a race like no other.

The once-a-year punters that help shape the market aren’t particularly concerned by form, weight or any of the other factors used to analyse most races.

A match made in heaven 🙌

The National is an outlier populated by aberrations. The distance is one contested so infrequently that pedigree pointers are of limited value. There are plenty of stayers that will cope with three miles well that won't last this trip.

Certain stats have helped to hit upon the winner over the years, with these trends relating to stamina, official ratings, big-field form, weight carried, and preparation for the race.

While jumping remains the name of the game, there’s less of a premium on a horse’s fencing ability than there once was.

Safety changes first implemented in 2013, which saw alterations made to the starting point, fence design and landing areas have changed the complexion of the race.

One thing that hasn’t changed is the marathon distance of the race and the need for bottomless stamina.

The old chestnut about it taking a two-and-a-half mile specialist to win the National should carry a wealth warning and it’s best to shun those that haven’t won over three miles and/or run impressive races over further.

Two of Minella Times’ market rivals tick many of the boxes for National winners, but are saddled with hefty weights which mean you may want to swerve them at the prices.

Delta Work and Any Second Now have obvious claims, but they carry 11-9 and 11-8 respectively in a race where you associate winners with carrying less than 11-6 over a large sample size.

If there is a 'Goldilocks zone’ for potential National winners, it’s one where runners have enough experience for a big-field handicap without being thoroughly exposed and devoid of the scope for further improvement. The ability to stay is paramount, but runs over trips short of the horse’s optimum trip and/or runs over hurdles to protect a handicap mark are also desirable.

Death Duty registers his first win since 2017 with victory in the Grand National Trial Handicap Chase at @punchestownrace, asserting on the run for home to score for @jackkennedy15, @gelliott_racing and Gigginstown House Stud 🏆👏 pic.twitter.com/JL9Cc7cIqV

Death Duty (50-1) has looked rejuvenated during the current campaign, with his only underwhelming effort coming behind Longhouse Poet in the Thyestes at Gowran Park.

His sixth in the Ultima at the Cheltenham Festival over a trip likely short of his best and on ground on the lively side was eye-catching, with the main concern whether he can achieve a lifetime best just 25 days after those exertions.

Eclair Surf (14-1) looks boom or bust material and would be impossible to fancy over the traditional Grand National fences given his suspect jumping.

If he does achieve a clear round, which is far from certain, he looks likely to go close and is incredibly well-treated in the weights off just 10-6.

An emphatic winner of the Classic Chase at Warwick on his penultimate start, runner-up Gericault Roque franked that form when filling the runner-up berth in the Ultima at Cheltenham.

Eclair Surf then finished second in the Eider Chase at Newcastle over just a furlong short of today's trip, conceding 11lbs to subsequent Scottish National winner Win My Wings. The manner of Win My Wings’ victory only cemented the view that Eclair Surf is well ahead of his current handicap mark. 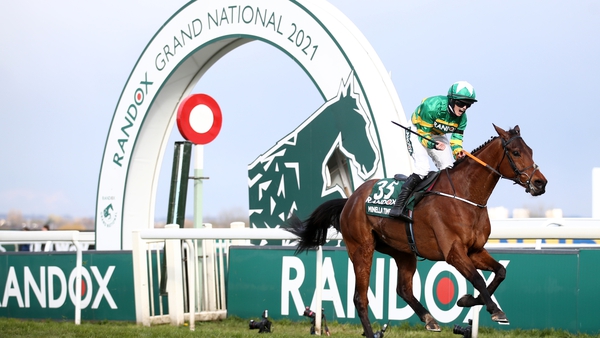