Cheltenham clerk of the course Jon Pullin is anticipating further drying of the ground ahead of Boodles Cheltenham Gold Cup day.

Prestbury Park saw heavy rain throughout racing on Wednesday, turning the ground to soft for the start of racing before officially being changed to heavy midway through the card.

However, Thursday was a dry day at the track with conditions improving to soft and Pullin believes good to soft could feature in the Gold Cup ground update.

He said: "We took the heavy in places out of the official going description and went soft all round after walking the course pre-racing, having found that the areas of heavy ground we had identified the night before had dried out well.

"The jockeys now say it's getting to be a combination of good to soft and soft and when I update in the morning, I definitely envisage good to soft appearing in the description.

"Another dry, bright and sunny day is in prospect, with temperatures up to around 14 degrees."

Prestbury Park welcomed an all-time record crowd for a single day's racing when 73,754 people enjoyed the action on day three of this year's Festival on Thursday. 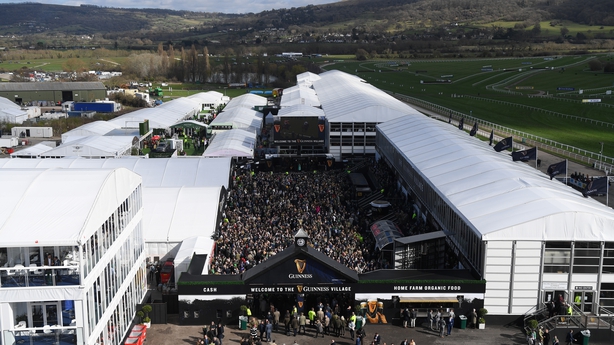 Ian Renton, managing director for the Jockey Club's west region, said: "It's always fantastic when St Patrick's Day falls during Festival week and it was great to see a record crowd of 73,754 join us today - more people than we've ever welcomed to Cheltenham before.

"As well as some incredible performances and memorable celebrations in the winner's enclosure, we've also enjoyed great weather today, which provided welcome relief for participants, spectators and especially our loyal and dedicated teams of employees around the racecourse, without whom we simply couldn't run the Festival.

"I couldn't be more excited for tomorrow's Boodles Cheltenham Gold Cup and the outcome of the Prestbury Cup, which is perfectly poised at 11-10 in Ireland's favour going into the final day."