Ruby Walsh has said that people saw a different side of Willie Mullins at Cheltenham on Wednesday as the Irish trainer finally managed to secure a win in the Queen Mother Champion Chase as Energumene powered home.

The much-anticipated rematch between the Irish star and Nicky Henderson's Shishkin did not materialise as the latter was pulled up five fences from home.

With Mullins' other contender, Chacun Pour Soi, parting company with his rider, Energumene was able to claim an eight and a half length win over second-placed Funambule Sivola.

"The highlight for me was definitely Energumene," Walsh told 2fm’s Game On.

"I think he was that emotional because that was the one big race that was missing from his CV.

"He has won a Grand National with Hedgehunter (2005), Gold Cups with Al Boum Photo (2019 and 2020), countless Champions Hurdles, Stayers’ Hurdles, he’s dominated the scene in Ireland for many years.

"He was born and bred into horse racing and he has now won everything there is to win as a national hunt trainer."

Walsh said that Mullins' late father Paddy remains his inspiration, and victories like that carry plenty of significance.

The @betway Champion Chase will finally have @WillieMullinsNH's name on it 🏆

"He has done things that his dad never did. He was a complete admirer of his dad, and all he ever wanted to do was emulate him. Now he’s basically exceeded what Paddy achieved and it was a massive thing for him personally.

"I’m 42, I've worked for him since I was 16, I know him a long time. I never saw him show emotion like that before but it was great to see that something could mean so much to him.

"He was a wonderful boss for me when I was riding, I still work with him and he’s a great friend. I was delighted for him.

"I think a lot of people saw a different side to Willie Mullins this afternoon." 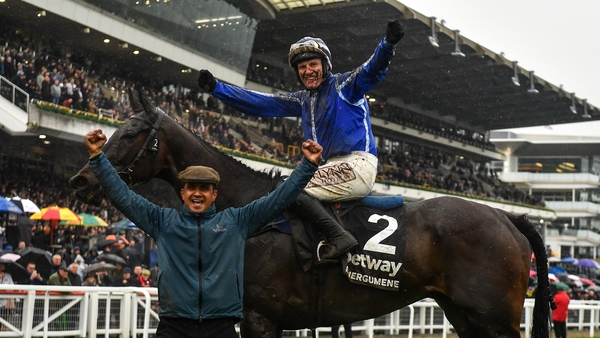