Honeysuckle bids to extend her hegemony of the two-mile hurdling division in the feature on what many regard as being the most compelling day of the Cheltenham Festival each year.

Since slamming Annie Mac in her debut in the point-to-point sphere, she's remained hoof-perfect in 14 starts on the racecourse over hurdles.

For all the plaudits, you can still argue that she hasn’t got the full recognition her feats deserve.

Rachael Blackmore’s annus mirabilis last year got racing onto the front pages for all the right reasons, but becoming the first woman to boot home a Champion Hurdle winner meant that trainer Henry de Bromhead and the horse were left a little in the shade.

To Blackmore’s credit, she never sought to hog the limelight and was a reluctant heroine in many ways, conscious that the hierarchy in deciding races is almost always horse-trainer (and stable staff) - jockey, even if that proved beyond the grasp of some of those outside the sport.

If the Honeysuckle who turned up at Prestbury Park last year arrives in the same form, her odds-on price could well be value, but if it’s the version that won the Irish Champion Hurdle, she may be vulnerable.

She was a visually authoritative winner of the highlight on the second day of the Dublin Racing Festival, but a direct comparison with the sectional time performance of the novice Sir Gerhard in the race which followed casts doubts over the substance of that win.

There is a possibility – slight though it may be – that she’s reached the end of the road, that she is now a horse in regression, and when mares in particular start to regress, it can be rapid and irreversible.

However, the probability is that she wasn’t fully wound up for her race at Leopardstown. Just as with humans, you can’t perform at a peak level all the time. That results in burnout. The Irish Champion Hurdle may be a prestigious prize in its own right, and extending an unbeaten record is something to strive for, but De Bromhead has handled the daughter of Sulamani masterfully. He won’t have compromised her prospects of again winning the ultimate prize five weeks beforehand.

There’s also the fact that Sir Gerhard isn’t any old novice to factor into a somewhat unflattering comparison.

Another masterclass from Honeysuckle in the Irish Champion Hurdle to thrill the #DublinRacingFestival crowd at Leopardstown #rteracing pic.twitter.com/ZdgwW53Qjl

Appreciate It represents the great conundrum in the race for many, perhaps even his trainer Willie Mullins.

There was a yawning 24 lengths back to Ballyadam in second when he took the Supreme Novices’ Hurdle and he hasn’t been seen since due to a minor setback which saw his intended novice chasing campaign aborted.

He's already an eight-year-old and has a bit to find on a sectional time comparison to Honeysuckle a year ago. However, he did race prominently in a contest run at a strong pace.

Appreciate It has already won over two and a half miles and shapes like a horse with plenty of stamina, but the minimum trip is likely ideal after such a long break.

Those who have backed him will point to the fact that Mullins was able to get the legendary Quevega fit enough at home to win at the Festival on multiple occasions after similar absences, and that’s a feat not many could emulate.

However, the Mare’s Hurdle is one that always lacks strength in depth, and this should be a more arduous challenge.

Appreciate It is the clear second favourite which signifies his strong winning chance, but wouldn’t be for me at the prices.

If Appreciate It has a lengthy absence to overcome, Teahupoo’s main negative may be that his Cheltenham prep came a little too recently, and it was one achieved on testing and tiring ground. Hopefully that hasn’t compromised his chances.

It appears that he wasn’t considered a genuine Champion Hurdle candidate until his convincing win in the Red Mills Trial 24 days ago.

Teahupoo was available at 33-1 and bigger on the exchanges for this contest on the eve of that race at Gowran Park, which is unusual for a horse from a gambling yard.

If his light has been hidden under a bushel, it’s likely due to what he shows – or rather doesn’t show – at home.

There’s nothing flashy about his work and he hasn’t impressed on the gallops the way some of his stablemates have, but he’s blossomed on the racecourse.

The Gordon Elliott charge was sent to Limerick rather than Leopardstown over the festive period and did well to get up in the shadow of the post from an unpromising position in a race run at a sedate pace until the closing stages.

A slightly disappointing runner-up behind Jeff Kidder at Fairyhouse last Easter, he’s left that form well behind in his runs this season, and while five-year-olds don’t have a great record in this race, he is maturing rapidly.

The improving Teahupoo extends his winning sequence in great style, kicking clear for a comfortable victory in the Grade 3 @REDMILLSHorse Trial Hurdle in the hands of @Robbie_Power_ for @gelliott_racing 🥇 pic.twitter.com/tXjw4Ee4pt

If the Champion Hurdle was run at Kempton rather than Cheltenham, Epatante would be dramatically shorter in the betting.

She's ideally suited to the sharp, flat track there due to her tendency to run keenly in the early stages of her races.

Nicky Henderson’s mare did win the race in 2020, but it was a weakish renewal. Drying ground will aid her cause.

Adagio is an interesting runner for David Pipe despite also being another five-year-old in the field.

Just like Teahupoo, he was last seen 24 days ago, when he finished runner-up to Goshen in the Kingwell Hurdle at Wincanton.

His late Cheltenham prep came as a result of a minor injury setback, but it was a very encouraging reappearance against a quirky rival who’s hard to beat when he gets his optimal circumstances.

A runner-up in the Triumph Hurdle last season, he humped top top weight to another second place in the Greatwood Hurdle on his only other outing this term. West Cork, the winner of that race, is a leading fancy for Friday’s County Hurdle.

The remainder of the field have either class issues or doubts over their current form to overcome.

As the market suggests, Honeysuckle is likely to extend her unbeaten record under Rules to 15 races, but she will have to improve on the form she showed at Leopardstown last time out. Appreciate It’s conditioning has to be taken on trust after that year-long absence and he’s no longer an each-way price in a race that is an attractive heat for each-way betting. A drifting Epatante makes some appeal, but not as much as as Adagio and Teahupoo (10-1) at the prices, with preference for the latter as we’ve yet to discover the ceiling of the ability of a horse transformed this season. 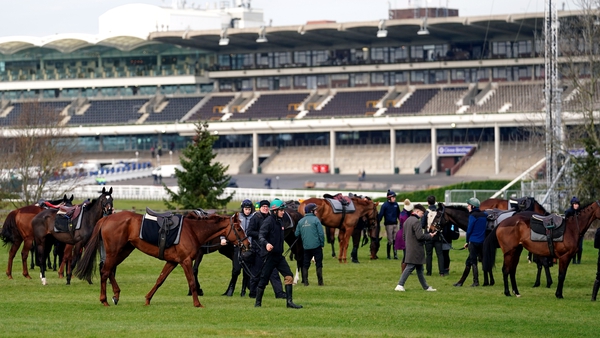