Tiger Roll finished down the field as The Very Man claimed top honours in the Navan Handicap Hurdle.

Pulled up on his seasonal reappearance in the Many Clouds Chase at Aintree last month, dual Grand National hero Tiger Roll was a 28-1 shot on his return to the smaller obstacles.

Gordon Elliott's five-time Cheltenham Festival winner started to make inroads with an eye-catching move under amateur rider Rob James before the home turn, and while he tired in the straight there was encouragement to be taken from his effort.

The Very Man, trained by Jessica Harrington, was 20-1 off the back of being pulled up at Leopardstown over the Christmas period.

But the eight-year-old bounced back to form with a determined display under Sean O'Keeffe, knuckling down from the final flight to see off Palace Rock by a length and a half.

Kate Harrington, assistant to her mother, said: "That was brilliant. He actually scoped dirty the last day - he swallowed a lump of clay and we had to wash out his throat it was so bad.

"That was more like it and he loved that bit of nicer ground.

"We might try to line up the Martin Pipe at Cheltenham for him. We might give him a bit of a break now, go to Cheltenham and then go to Aintree as well." 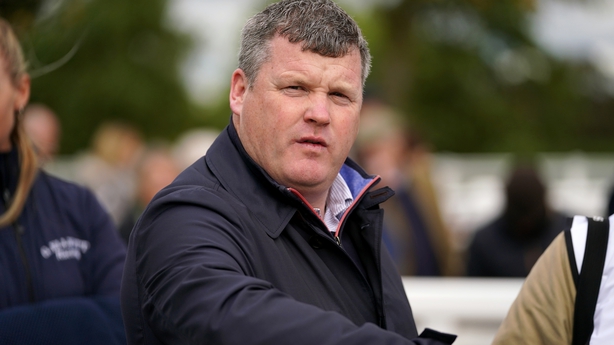 Elliott [pictured above] had earlier teamed up with Davy Russell to win both divisions of the Graigs Lane Maiden Hurdle.

Jaycean was a 10-1 winner of division one, while Ash Tree Meadow readily justified 11-8 favouritism in division two.

Elliott said: "I thought Jaycean was a baby, he was very raw and I said we'd give him a run in a maiden hurdle and see where we are. He's a nice horse.

"Ash Tree Meadow is nice horse, he's a big chaser really and he's a horse for the future.

"Davy said that while it looked like he didn't jump that well he was travelling so well that he didn't let him wing hurdles because he would have made up too much ground.

"He's a grand horse. He likes that nice ground."

The Doyen gelding completed a hat-trick between May and July of last year, but had finished out of the places on his two most recent starts.

O'Brien's assistant, Brendan Powell, said: "It was a nice performance for a horse that really wants further - he will be a three-miler.

"I just thought that they might do him for a bit of toe, but he's very tough and he jumped well up the straight.

"He stays, he's honest and he gallops. He's a nice horse going forward."