Frankie Dettori punched the air with delight and produced his trademark flying dismount after teaming up with his old friend Johnny Murtagh to win Barney Curley's memorial race on Trueba at Bellewstown.

Curley is famed in racing folklore for some of the gambles he managed to pull off - the most famous of all being the Yellow Sam coup which took place at Bellewstown in 1975, which involved blocking the only public telephone box at the track.

As a result it was arranged the Gannons City Recovery And Recycling Services Ltd. Supporting DAFA Handicap would be run to raise money for Direct Aid For Africa, a charity Curley set up to support the underprivileged people of Zambia.

Dettori has gone on record saying he will be forever in debt to Curley, who took him under his wing during the Italian's early days in Newmarket.

At a time in his career when Dettori needed a father figure, Curley stepped in and they remained great friends until his death earlier this year.

Dettori, riding at Bellewstown for the first time, was totally immersed in the day, signing autographs and having his picture taken hours before the race.

When the time came, as so often, Dettori kept it simple, sitting second on Trueba (4-1) and in the final 50 yards he forged in front and held on to beat Meishar.

Dettori said: "We managed to dedicate today to the great man.

"I've heard so much about the gamble. To be here and get a picture with the telephone box is remarkable. 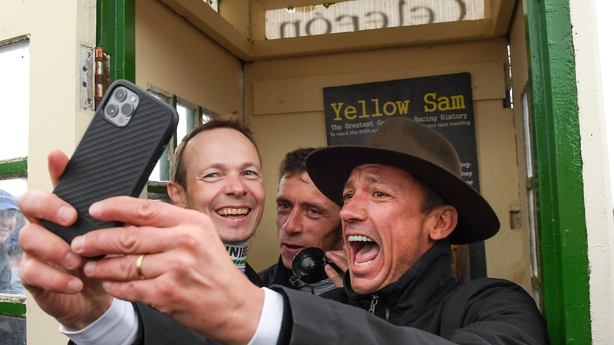 "When I was an apprentice I rode a couple of winners for Barney, then, when my claim was slashed, I wasn't much use to him!

"We stayed close friends for all of his life, I miss him already.

"We swapped houses, one of the many things we did together.

"He was a father figure to me and a great mentor."

Dettori added: "That one is for Barney.

"It's been a mad old day and I'm sure Barney is having a chuckle up there just that I'm here.

"It's been an amazing day and it's also my first winner for my good friend Johnny. The reception has been mad, I feel like I'm playing in the Ryder Cup - it's been exhausting at times and I must have taken a million selfies, but I'm glad I did."

Murtagh said: "It is brilliant! I'm sure if I'd told him to sit fifth on the fence he wouldn't have listened to me!

"He is a straightforward horse and he has been coming down the handicap. It was an ideal race for him, he likes to front run.

"Frankie rang me up the other day and he said 'I'll ride yours in the big race, has he a chance?'. I said 'I think he has a chance'. It's a great story and I'm thrilled it is in honour of Barney Curley who was a great man and ridden by another great man in Frankie Dettori.

"We did (have some titanic battles on the track), but he looked after me really well in England and I lived in his cottage. He introduced me to Barney Curley and I have to say we really enjoyed the times together."

Fund-raising throughout the day was expected to raise in the region of €115,000 for DAFA.