Tenebrism produced a brilliant performance in coming from virtually last to first to win the Juddmonte Cheveley Park Stakes at Newmarket.

Aidan O'Brien's charge had just one previous run under her belt, winning a Naas maiden back in March, but she shrugged off her 181-day absence in some style with a power-packed finish.

Flotus led them up the stands side in the six-furlong contest, setting a sound pace in front as Ryan Moore was out the back on 14-1 shot Tenebrism.

It looked as though Simon and Ed Crisford's Flotus had the measure of her rivals with a furlong to run, as favourite Sacred Bridge and her main market rivals Sandrine and Zain Claudette were all making little impact on the leader.

However, Tenebrism was responding in kind for Moore and found an extra gear to sweep by Flotus and win going away by a length.

Sandrine kept on for third, beaten a further three lengths in the Group One heat.

Tenebrism, who boasts an exceptional pedigree as a daughter of Caravaggio out of top miler Immortal Verse, is 8-1 for the 1000 Guineas with both Betfair and Coral. 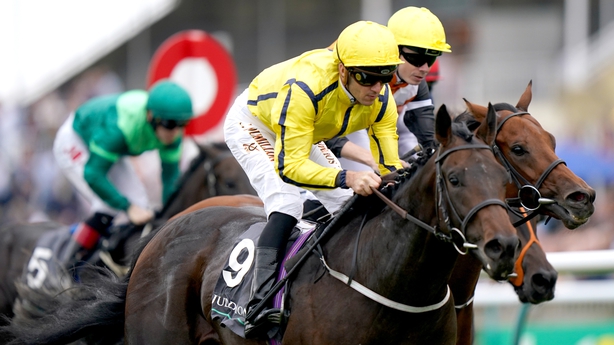 Meanwhile Christophe Soumillon produced Perfect Power (above) with a flawlessly-timed run to get the best of a blanket finish in the Juddmonte Middle Park Stakes at Newmarket.

Richard Fahey's charge already had a Group One victory on his record as he landed the Prix Morny last time out, and he was sent off the 11-4 favourite to follow up in this six-furlong affair.

Soumillon was towards the rear through the early stages as Go Bears Go and Twilight Jet went toe to toe up front, setting a sound gallop, although the challengers were lining up in behind as the field approached the two-furlong marker.

Twilight Jet did his best to fend them off, but Armor, Asymmetric and Caturra all put the pressure on before Perfect Power came with a precision burst down the middle of the track.

He surpassed them all to steal a half-length verdict, with Castle Star also finishing with purpose from the rear to take second.

Perfect Power halved the winner in price to 8-1 for the 2000 Guineas, while Coral go 10-1 about his chance in the Commonwealth Cup at Royal Ascot.

A relieved Fahey said: "I've been watching racing all week and when we got stall one I thought 'someone down there doesn't like me!'.

"I was very negative in my own mind, but he is a special horse. The way he quickened up today - it took a special ride and a special special horse to win like that today.

"We knew were struggling from the draw and Christophe said 'I'll drop him right out today'. I said 'you do what you like, kid!'."