Ebro River created a minor surprise as he got the best of a thrilling finish to the Keeneland Phoenix Stakes at the Curragh.

A Listed winner back in May, Ebro River had been out of luck in three subsequent Group-race outings - albeit never far away, most recently finishing a narrow fourth in the Richmond Stakes at Goodwood last week.

He looked up against it with the likes of Railway Stakes first and second Go Bears Go and Castle Star, plus the highly-regarded Dr Zempf, in opposition and was sent off at 12-1 for Group One honours.

Teaming up with Shane Foley for the first time, Ebro River was prominent throughout - but it looked as though those lining up in behind to challenge would swallow him up in the final of six furlongs.

However, Ebro River dug deep to fend off Dr Zempf by three-quarters of a length, with 6-4 favourite Go Bears Go a further head back in third and Castle Star a length away in fourth.

Ebro River is trained by Hugo Palmer, who saddled the colt's sire, Galileo Gold, to win the 2000 Guineas and St James's Palace Stakes back in 2016.

🗣 "I've been telling James Doyle to hold him up, get him to settle, ride him to finish . . . but I think those were duff instructions!"

Elsewhere, Gustavus Weston made virtually all to reclaim his title in the Rathasker Stud Phoenix Sprint Stakes.

Joe Murphy's charge won the six-furlong event in 2019 and was sent off a 7-2 chance this time in the hands of Gary Carroll, with British raider Light Refrain the 6-4 favourite.

Gustavus Weston was sharply away for Carroll and he was happy to settle on the front end with the five-year-old, who got into a nice rhythm in the early exchanges before pushing on for the finish.

Power Under Me was on his heels, but Gustavus Weston keep going all the way to the line, recording a two-and-a-quarter-length win, with A Case Of You beaten a nose in third.

Light Refrain never looked like challenging on the outside, eventually finishing fifth.

Murphy's sights are now firmly set on next month's Betfair Sprint Cup at Haydock, for which Gustavus Weston is an unchanged 12-1 shot with the sponsors.

He said: "That's a stepping stone to Haydock on September 4. Then we might come back for the Flying Five here and maybe the Abbaye.

"That was a very good performance and the time was good.

"We've found the key to him. He's a more relaxed horse now and he's stronger. He keeps on improving all the time.

"It's amazing, since we've put him into a big stable on his own - he has a whole barn to himself - he's just thrived. It's amazing how little things like that can make a difference.

"That's the thing with horses, whether they can sing or not, you have to get the voice out.

"We have to make him sing and he's giving us memories that will last a lifetime."

Cairde Go Deo stepped up on a promising debut run to claim an impressive victory in the Loder Irish EBF Fillies' Race.

The daughter of Camelot finished second on her racecourse bow for Ger Lyons at Leopardstown last month and plenty clearly fancied her chances of improving on that as she was sent off the 8-13 favourite under Colin Keane.

She was travelling noticeably well at the top of the straight and Keane took the decision to launch her challenge down the middle of the track, where she pulled four and a half lengths clear of a promising newcomer in History - a 2.8million guinea purchase as a yearling in October.

Despite the manner of her success, connections will take a patient approach with no big-race entries at this stage.

Shane Lyons, assistant to his brother, said: "Obviously she had experience over a lot of her rivals, but Ger doesn't want to over-race her this year. It's all about next year and she has been telling us that she is crying out for a run.

"She got away with that ground. She obviously wants further, but definitely wants next year. We won't be rushing her back and that's why she has no early-closing races.

"If she tells us, we will supplement her for the autumn. She will run again, but it's all about next year and we'll let her grow into herself.

"From the word go she's telling us she's sharper, being what she's by, than what she's meant to be."

Cowboy Justice (2-1 favourite) made virtually all for a narrow success in the opening Irish Stallion Farms EBF Maiden.

Plenty of attention was focused on Bluegrass, another newcomer for Aidan O'Brien with a sterling pedigree as a son of Galileo out of top sprinter Quiet Reflection, but he was slow to start and never able to get in a serious blow.

In contrast, Cowboy Justice bowled along in front for Shane Foley and while the well-backed Swan Bay made a late dash for glory, Jessica Harrington's charge held on by a neck at the line.

Harrington said: "I'm delighted with that. Shane said he was just getting a bit lonely out in front.

"Shane said he's still pretty immature and will improve again from that. He's a nice horse and we'll probably be staying at seven furlongs for the moment.

Harrington and Keane made it a double with My Holy Fox (17-2) in the DMG Media Fillies Maiden.

Out of luck in two previous outings, My Holy Fox took a huge leap forwards with a three-quarter-length verdict over Punhakha.

Harrington said: "At Gowran she was very raw and green, but she ran on well in the end.

"I wasn't sure if we were going the right distance today as I thought she needed a mile and it looked like that halfway through the race. Suddenly she quickened up and she won.

"She's a beautifully-bred filly and has won a Curragh maiden now. Some black type would be nice and she probably needs to get her toe in. Things fell right for her today."

In the Irish Stallion Farms EBF Maiden, 9-4 favourite Jon Riggens came good over the final furlong to see off Heavenly Power while No More Porter claimed the TRI Equestrian Handicap from Comfort Line.

In the final race of the day, the Anglesey Lodge Equine Hospital Handicap, 20-1 outsider Texas Rock finished first ahead of Dragon's Call. 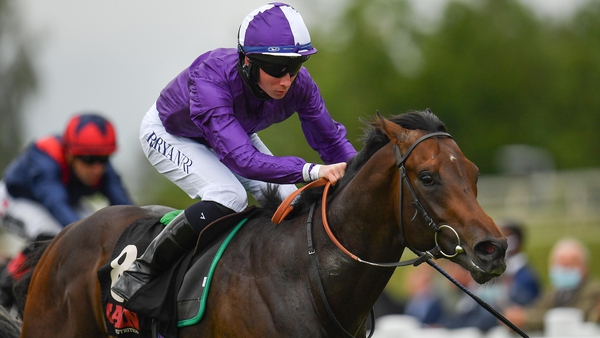