The Ado McGuinness-trained five-year-old was a narrow winner of the €100,000 contest 12 months ago, before going on to win at Listed and Group Three level by the end of 2020.

He finished seventh behind stablemate Sirjack Thomas in Tuesday's BMW Mile, and the pair renewed their rivalry in the Festival's final-day feature.

There was drama from the start, with Archie Watson's British challenger Stone Soldier unshipping Oisin Orr shortly after the stalls opened.

The loose horse threatened to cause trouble rounding the home turn, impeding 5-1 shot Current Option just as he was challenging another stable companion in Spanish Tenor for the lead.

However, 7lb claimer Cian MacRedmond managed to get his mount on an even keel and picked up well to score by half a length from the fast-finishing On A Session.

Spanish Tenor was third, with Sirjack Thomas fourth, to round off an excellent result for McGuinness.

He said of the winner: "I fancied him, because I thought he was the class horse in the race.

"He ran well the other night when Cian got blocked in. I love when you drop these Group horses back into handicaps like that. He's proved that he's a very good horse.

"Of course we got a big scare up the hill with the loose horse - but it worked out great.

"We had four in the first six, and I can't believe it."

Current Option looks set to make a swift return to action too.

"We'll probably go to the Listed race next week in Cork, because he won't carry a penalty," McGuinness added.

"We did it last year. So if all goes well, we'll do it again and then give him a break."

The front-running Church Mountain (12-1) provided trainer Denis Hogan with his third winner of the week, digging deep for rider Joey Sheridan to land the Kenny Galway Volvo Handicap by half a length from Ten Ten Twenty.

Hogan said: "That was great, and Joey executed it well. We always liked this horse, from the time he ran as a two-year-old, but he's a massive big lad and he's still not the finished article.

"He's grown all year and he's babyish - you could see there he was very green in front.

"We've schooled him over hurdles, but we probably won't go that route this year. We'll let him mature first."

The Lady O'Reilly-owned filly was a never-nearer sixth on her racecourse debut at Fairyhouse three weeks ago, but displayed marked improvement at Ballybrit - charging home to prevail by three-quarters of a length.

"The step up in trip helped, and she obviously came on for her first run," said Keane.

"She could be a nice filly going forward, because I'd say there is a lot of improvement yet to come from her."

Keane doubled up aboard the Willie Mullins-trained Micro Manage in the JPK Fencing Systems Race.

The 8-11 favourite eventually wore down the front-running Monas Melody before pulling three and three-quarter lengths clear inside the final furlong, giving Mullins his 10th winner of the week.

Keane said: "He did it well. He's a horse with a good bit of form to his name to be fair to him.

"He's a horse that they obviously thought highly of, and they ran him in the Irish Leger last year. He just probably wasn't right on the day and disappointed.

"He's a fine, big, strong horse - and talking to Willie beforehand, he thought he'd improve from the run. So to go and do it like that, you'd be very happy with him."

Imposing Supreme notched his second win of the Festival in the Ardilaun Hotel Handicap.

A different jockey for Imposing supreme from his win on Tuesday but the same result, as he wins the @Ardilaungalway Hotel Handicap under @chrishayes24. A great result for trainer Thomas Gibney. ???? pic.twitter.com/GOh6oT9FlA

Victorious over an extended mile on Tuesday, Tom Gibney's charge was the 2-1 favourite to follow up - dropping down to seven furlongs.

Ridden by Chris Hayes, the grey knuckled down well once meeting the rising ground to beat Fridtjof Nansen by half a length.

Gibney said: "That's brilliant. He came out of Tuesday's race as well as I've ever seen him and gave us huge confidence for today.

"It's great that it's coming together for him now at this stage of the game. We were very disappointed with him last year when we thought we'd do well.

"The handicapper went to town on him after Tuesday, and it seems a bit exaggerated to me, but it was great to win again today anyway." 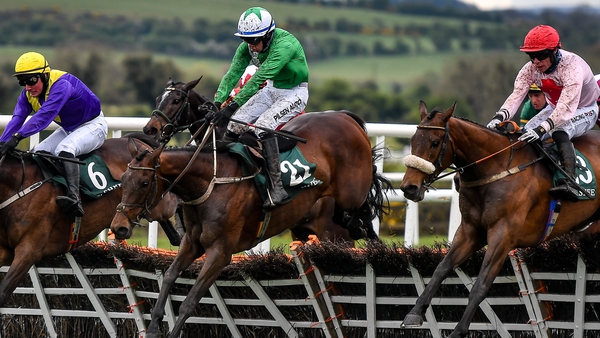