Crowns Major went one better for Emmet Mullins than earlier in the week when winning the €100,000 Galway Shopping Centre Handicap.

Second over two miles on Tuesday in a minor contest, the four-year-old, who won a bumper at the Punchestown Festival, was ridden by 7lb claimer Wesley Joyce.

Never far from the pace, Joyce kicked on a furlong out and once by Longbourn he won going away by two lengths.

"It was a brilliant performance, especially from Wesley here in Galway around a tricky track in a big handicap like that. He was very cool on him and we're delighted," said Mullins of the gelding he bought in Japan.

"The trip was definitely a worry, but to be fair they went such a slow gallop in the two-miler the other night, and he was keen - that may as well have been a mile-and-a-half race.

"It was a huge pot, a great race, and if you're not in it you can't win it. That's a great big pot to get with a horse like that. The little foray to Japan is paying off in spades now!"

He added: "It was only his first ever run in a handicap on Tuesday night and I'd say the experience and everything stood to him.

"It was always the plan to target these premier handicaps with him, the November Handicap, the Cesarewitch and the likes.

Joyce said: "He jumped very smart and I sat behind the leaders as I thought they were going a bit quick. I said I'd let them go on and give my horse a breather.

"I came along, picked them up, gave him two slaps and then he just brought me home. He won with a bit in hand and he's a very nice horse.

In the first race of the day, the Irish Stallion Farms EBF Maiden, fancied Buckaroo just edged out Stone Age in the final stages to get an early win for trainer Joseph O'Brien.

Ridden by Declan McDonogh, the newcomer had less than half a length to spare at the line.

8/13 favourite Sherkin Island had a strong race throughout to claim the Irish Independent On Saturday Maiden.

There was a surprise in the O'Leary Insurances Handicap as 20/1 shot Dedillon prevailed in a field of 16.

Andrew Slattery’s five-year-old mare was prominent throughout and had a length and a quarter to spare over High Altitude.

In the first Galway Shopping Centre Handicap of the day, 12/1 shot Kaaranah just managed to hold off Black Cat Bobby.

In the Irish EBF Auction Series Maiden, favourite Nectaris, ridden by Shane Foley, won by a couple of lengths while Cool and Clever prevailed in the Irish Stallion Farms EBF Nursery Handicap after edging a competitive finish with Snapius and joint-favourite Barud also pushing hard.

In the final race of the day, 25/1 shot Dazzling Darren, under Robert Whearty, came through to fend off Crassus. 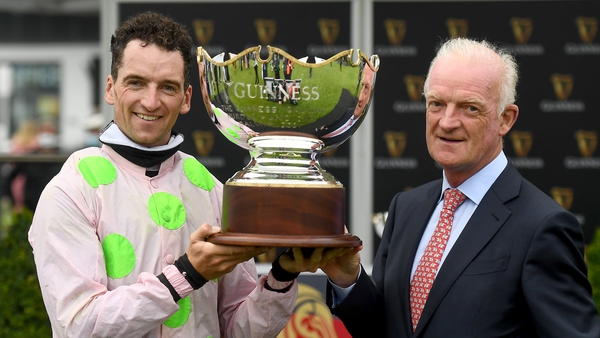