Third Realm threw his hat into the ring for next month's premier Classic at Epsom with an impressive display in the Novibet Derby Trial at Lingfield.

Fourth on his sole juvenile appearance at Kempton in November, the son of Derby hero Sea The Stars made a successful reappearance at Nottingham last month to earn himself this step up to Listed class.

Ridden with restraint for much of the near mile-and-a-half journey by David Egan, the 14-1 shot was switched wide to mount his challenge rounding the home turn and quickly reeled in the leaders to grab the advantage.

Favourite Adayar did his best to close the gap, but Egan always looked in control in front and Third Realm was ultimately good value for the winning margin of a length and a quarter.

Varian said: "It goes without saying we're delighted with that performance today.

"We thought he’d run well. It’s the nature of the business that you’re cautiously optimistic when you’re going from a maiden to a recognised trial, but it isn’t a surprise – he’s a colt we think a lot of.

"He won nicely at Nottingham. I was worried about the ground, to be honest, but I thought if he handled conditions he’d be well up to running a nice race."

Varian added: "I’ve yet to speak with the owner (Sheikh Mohammed Obaid), so we’ll not set anything in stone just yet and most importantly we need to see how the horse comes out of today’s race.

"He ticks a lot of the boxes (for Epsom) in that he’s won a recognised trial, it looks like he’ll get the trip and he’s won on good to firm ground at Nottingham and in pretty testing conditions today.

"He’s a neat, well balanced colt who ought to handle the undulations of Epsom." 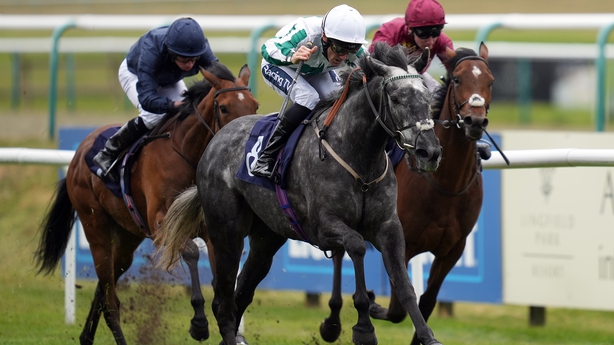 A winner at prohibitive odds on her racecourse debut at Newcastle in February, Archie Watson's filly was last seen finishing fourth behind the well-bred leading Oaks contender Noon Star in novice company at Wetherby last month.

Stepping up to Listed class, the American-bred filly raced close to the pace throughout in the hands of Paul Mulrennan and battled her way to the front in the home straight.

There were still plenty in with a chance of victory entering the final furlong, but it was Sherbet Lemon who saw out the near mile-and-a-half trip well to prevail by three-quarters of a length from Save A Forest, with Ocean Road best of the rest in third.

The winner is owned by Apple Tree Stud, which is managed by former leading National Hunt jockey Robert 'Choc' Thornton.

He said: "She wasn’t far behind John Gosden’s horse (Loving Dream) at Wetherby last time. She was favourite for the race today (finished fifth) and there were extenuating circumstances for our filly, as she was stood in the stalls for 10 minutes and got shuffled back.

"We thought she’d run well today, but she’s surprised us that she’s won."

Asked whether Epsom would be next on the agenda, Thornton added: "I think we sort of have to, don’t we?

"I’m not sure how many chances (you get) to do that type of thing – it’s a dream to have runners in those type of races.

"She’s handled all types of ground and handled the undulations today, so we may as well have a go.

"She’ll stay galloping, so you never know, she could run into a place."