Frankie Dettori ended a 30-year wait for his second victory in the tote+ Chester Cup aboard Dermot Weld's Falcon Eight.

Out of the same mare that produced the top-class Free Eagle and dual Irish St Leger heroine Search For A Song, Falcon Eight was a 15-2 chance as he made his handicap debut under top-weight on the Roodee.

Dettori, who won the 1991 Chester Cup aboard Star Player, produced a typically well-executed ride aboard the Moyglare Stud Farm-owned six-year-old – keeping his powder dry in midfield for much of the two-and-a-quarter-mile feature.

The popular Italian allowed his mount to make inroads ahead of the home turn before switching wide, after which Falcon Eight powered up the straight to win comfortably by two lengths.

Dettori said: "I had to go to Plan C. I know he's not the fastest away and they went fast, so I just thought 'well, I’ve got to take it’.

"The pace was honest throughout, but I was able to take a pull and I saved ground by going all the way to the back. When we got to three and a half (furlongs) out I peeled off and went two or three wide.

"I was able to sling shot around the turn and in fairness he picked up. I know he was lumping 9st 10lb, but he is a Group horse really.

"Dermot always had this race in mind – he booked me three weeks ago – and he’s a master at these kind of things. He made my life easy.

"It’s a bit like Australian racing with its short straight here, because you are on a stayer you’ve got to get them going early between the three and the two." 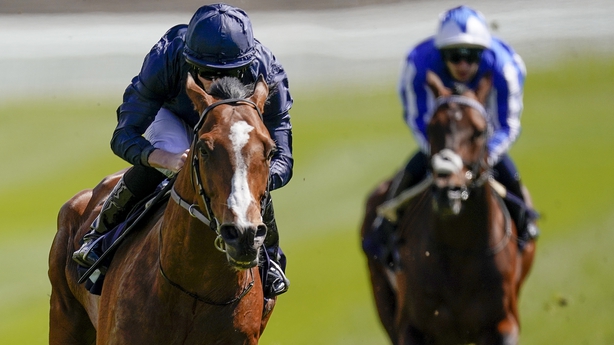 Armory (6-5F) proved a class above his rivals as he made a successful start to his campaign in the Melodi Media Huxley Stakes, with a step back up to the highest level next on the agenda.

The Galileo colt brought some top-class form to the table from last season, having finished fourth in the Irish 2,000 Guineas and the Tattersalls Gold Cup, third in the Irish Champion Stakes and second to former stablemate Sir Dragonet in the Cox Plate in Australia.

He was sent off favourite to provide trainer Aidan O'Brien with a third victory in this Group Two contest – and after settling at the rear of the four-strong field for much of the race, quickly found top gear under Ryan Moore in the straight to leave his rivals toiling.

"I suppose what he has is an unbelievable turn of foot, which is a great thing in a horse because you don’t mind if they go fast or they go slow, as he quickens very well.

"He’s done very well over the winter, he had a lovely run in Australia last year but things didn’t really work out for him so we’re delighted.

"He has plenty of pace, but we always thought he’d get 10 furlongs – when you have a horse who quickens like that it’s a bonus, and Ryan gave him a lovely ride."