Sam Twiston-Davies is hoping for a "dream" Punchestown success today aboard the only non-Irish runner in the Gold Cup - Clans Des Obeaux.

With the withdrawal through injury of the Henry de Bromhead-trained Minella Indo on Monday, just six horses will contest the race, one of three Grade Ones on the card.

Four of them are trained by Willie Mullins, including the current favourite Al Boum Photo.

Clans Des Obeaux, co-owned by Alex Ferguson and trained by Paul Nicholls, was supplemented for the race last week.

Twiston-Davies takes the ride in place of the injured Harry Cobden and is thrilled a prime opportunity has fallen into his lap.

"To come over to Punchestown with a live chance is incredibly exciting," he told RTÉ's Morning Ireland as he prepared to depart Heathrow Airport for Dublin.

"A lot of the time as our season is quietening down I'd be sat at home watching it in envy of what was going on so to be going over there with a chance is a dream.

"Al Boum Photo is still an incredibly good horse, he's going to take all the beating, but Clans Des Obeaux was very impressive at Aintree and is in a really good place. We're going to go over there, try our best and hope for a bit of luck."

FLASHBACK: On Punchestown Gold Cup day, we look back at Sizing John's victory in 2017 | Watch #PTown21 live on @RTE2 and @RTEplayer from 4pm pic.twitter.com/sLcyiVZRRN

The pandemic has presented unprecedented challenges for owners and trainers to bring horses across the Irish Sea. Twiston-Davies said it's demanding on those involved but stressed his gratitude at being able to compete throughout such a difficult period.

"We've had to do a lot of paperwork, a lot of checks. You have to have your Covid test within 72 hours of the race and you obviously have to pass the health checks when you're over.

"There's a lot of hoops to jump through but even more so, from an owners' side of it, they're supplementing a horse they're not actually going to be able to watch live. That must be a tough decision for everyone but at the same time with the aura of Punchestown, it's definitely one you want to be taking part in.

"Punchestown is a huge occasion. It's a great way to end what's been a tricky year with Covid. We're blessed to be back racing. It would be a dream [to win]." 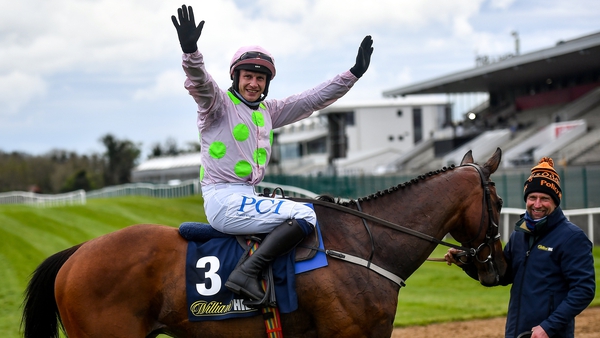