Broome had to work hard to justify odds-on favouritism in the Holden Plant Rentals Alleged Stakes at the Curragh.

Aidan O'Brien's charge had looked smart in 2019, winning two Classic trials before finishing a close fourth in the Derby at Epsom, but he subsequently lost his way before returning to winning form on his comeback at Naas last month.

Sent off the 1-2 market leader on the back of that run, Broome was slowly away, with Ryan Moore pushing him up early to sit in fifth as Numerian set the early pace.

Broome looked in a perfect position to challenge, but Moore was having to get to work on the turn for home and had ground to make up on the frontrunners with two furlongs to run.

It looked as though Thundering Nights had produced a winning effort when she collared Up Helly Aa at the furlong pole - but Moore was not giving up on Broome, who responded to his every urging to poke his head in front just strides from the post.

A quick Group 3 double for @ballydoyle and Ryan Moore 👏 pic.twitter.com/Wg6V6RbY9T

Broome eventually prevailed by half a length, with Up Helly Aa hanging on to third, a further two and three-quarter lengths adrift.

Betfair make Broome a 12-1 chance for the Prince of Wales's Stakes at Royal Ascot, but O'Brien is eyeing a switch back up to 12 furlongs from a mile and a quarter.

He said: "He's a lovely horse and will probably love going back up to a mile and a half.

"It was nice that he didn't have to make the running, and Ryan was very happy with him.

"He can have a look at races like the Coronation (Cup) and the Tattersalls (Gold Cup)."

Trainer and jockey were completing a quick Group Three double after the Gladness Stakes victory of Lancaster House.

Following Broome's success, O'Brien added: "Ryan felt the pace was nice early and then dropped in the middle of the race.

"He had to work a bit harder than if the pace was consistent over a mile and a quarter. He's brave."

A fourth winner today for @ballydoyle and Ryan Moore 🎉 pic.twitter.com/S5ReiollAz

A Classic trial could be on the agenda for Wordsworth after he provided one of four wins for Aidan O'Brien and Ryan Moore at the Curragh on Saturday.

The Galileo colt is a full brother to St Leger winner Kew Gardens and had made a promising start for the Ballydoyle team when chasing home stablemate and Cazoo Derby favourite High Definition at this track in August.

Beaten just three-quarters of a length on that occasion, he was sent off the evens favourite to open his account in the TRI Equestrian Irish EBF Maiden over 10 furlongs.

Moore had him settled in second behind Sunwalk in the early stages - and while Wordsworth took a bit of time to hit top gear in the straight, when he found his stride he pulled clear in decent style, beating Agrimony by two lengths.

"Ryan said it was nice the other horse led him today and he felt when he got him out that he was always going to win.

"He had a good blow, and I think he'll come on from that run - horses that are lazy usually do.

"If he progresses in time for a trial then we'll put him in, but you would imagine it would have to be a mile and a half."

O'Brien and Moore had kicked off their winning spree with Glounthaune in the opening Irish Stallion Farms EBF Maiden.

The 9-4 joint favourite was always to the fore in the six-furlong heat - and when challenged by fellow market leader Castle Star, he dug deep to win by a neck, with Kirsapp two and a quarter lengths back in third.

O'Brien said: "He's a nice horse, and we've always liked him. He'll go for a winners' race now - and then maybe look at Ascot.

"He gets six well and looks like he'll get seven."

Royal Ascot could also be on the agenda for Cheerupsleepyjean (5-2) following her two-and-a-quarter-length win in the Irish Stallion Farms EBF Race for Fozzy Stack and Chris Hayes.

Stack said: "She had been working well but hadn't been away anywhere. There is probably plenty of improvement in her, because she was quite green in front.

"She's a fast filly, and six furlongs is probably as far as she'll ever get.

"It's Noel O'Callaghan's family, and she's related to Dandy Man and Sandhurst Goddess.

"Hopefully she'll come back here (on May 3) for a Listed race in about a fortnight. She might make into a Queen Mary or Albany filly.

"She did her best to get beat in the first furlong and a half. She was a bit startled and lit up. She is usually fairly relaxed at home and hopefully she will learn from that and be more professional the next day."

Raise You (9-2) led home a one-two for Joseph O'Brien in an eventful Tesoro Vita Handicap.

The winner drifted across the track under 5lb claimer Dylan Browne McMonagle, impeding Tauran Shaman in particular, but still fended off Fame And Acclaim by a neck.

The stewards looked into the race, but allowed the result to stand.

Coogan said: "She's a grand filly and came to us from Sarah Lynam. She had a few stalls issues and we had to get her re-certed.

"If we can keep her mind right, there is probably a bit more to get out of her. She's tricky and you have to give her kid-glove treatment.

"I gave her an each-way chance, but I didn't think she was going to go and do it like that. If I did then I would have had a few quid on her!" 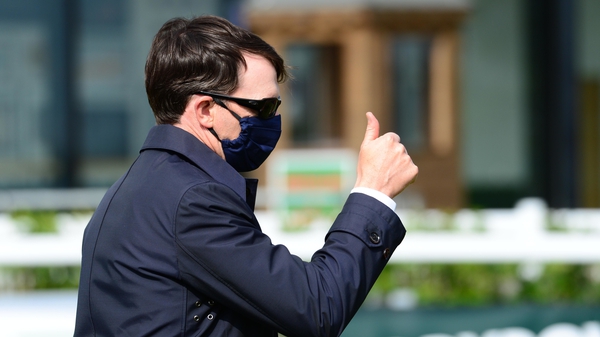