Grand National winner Rachael Blackmore admits she was unable to sleep on Saturday night as she relived her Aintree heroics.

Just weeks after breaking boundaries at the Cheltenham Festival, by being crowned the leading rider in the Cotswolds, Blackmore outdid even that on Merseyside.

Riding Minella Times in the most famous race in the world, 44 years after Charlotte Brew (now Budd) partnered the 250-1 shot Barony Fort to become the first female to ride in the race, Blackmore created history.

While she would rather not focus on the issue of gender, she acknowledges that whatever she had previously achieved in her career, the recognition as a Grand National winner is on a completely different level.

"I've re-watched it a few times, and I didn't sleep at all on Saturday night - that's the kind of high you are on," Blackmore told BBC Radio 4.

"For me, in racing, the gender thing was never an issue - and I've just carried that forward.

"There's no taking away from the fact that it wasn't that long ago people were saying women shouldn't ride in the National - but personally it's never been an experience I've had, and it should be something that racing is very proud of." 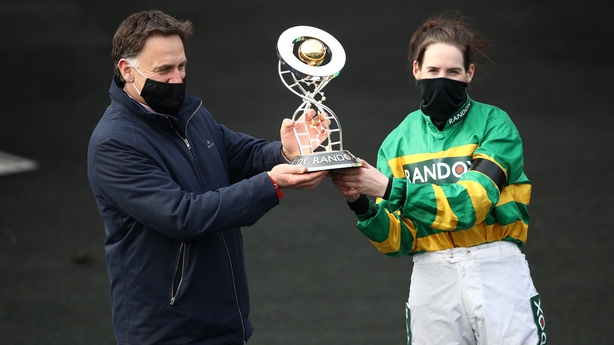 Despite her headline-grabbing success, Blackmore will not be getting too carried away.

"The one thing that you learn very quickly (in racing) is that you lose a lot more than you win," she said.

"You'll have falls, disappointments and you are living for the days when it does work out - days like Saturday. It erases all the other days very quickly."

Just about the only thing Blackmore has got wrong in recent years is her choice of mount in the Gold Cup at Cheltenham, when she passed over eventual winner Minella Indo for A Plus Tard - who finished on his tail in second.

With Paul Townend currently sidelined by a foot injury, Blackmore has 10 winners to find to draw level with him in the race to be Ireland's champion jockey.

She added: "I never set myself massive targets and I'm not going to start now - I just have to take every day as it comes, try to get the best out of every horse each day.

"Of course I'd love to win the Gold Cup, but that is not something that I sit down and target at the start of the year.