Minella Indo and A Plus Tard are likely to run at Punchestown and Aintree respectively after providing Henry de Bromhead with a one-two in the WellChild Cheltenham Gold Cup.

The Knockeen-based handler enjoyed a memorable week in the Cotswolds - becoming the first trainer to saddle the winner of the Champion Hurdle, Queen Mother Champion Chase and Gold Cup in the same week.

Minella Indo completed the feat when denying better-fancied stablemate A Plus Tard in Friday's feature - and could now bid to crown his season with victory in the Punchestown Gold Cup on 28 April.

"I look back at the Gold Cup with disbelief, to be honest. I watched it back this morning and was kind of going 'this didn't happen'," De Bromhead said on Racing TV's Luck on Sunday programme.

"Minella Indo kept staying and I'm not sure we've seen the half of him - he's so tough.

"I haven't really spoken to Barry (Maloney, owner) about plans, but Punchestown would be great if he seems good - I think we should strongly consider Punchestown."

A Plus Tard ran an excellent race to fill the runner-up spot under the all-conquering Rachael Blackmore and could head for the Betway Bowl at Aintree, given his preference for left-handed tracks.

He added: "The one question about A Plus Tard going into Cheltenham was he's got so much class, would he get the last two furlongs? But he really did, in fairness to him - and wouldn't he have been a very impressive winner if 'Indo' wasn't there?

"A Plus Tard's form is ridiculously better on left-handed tracks, so if he's well, we're considering Aintree for him.

"That (going left-handed) limits him, but the race at Haydock could be a lovely race for him in the autumn.

"When you have two horses like that, you'd love to try to keep them apart as best you can." 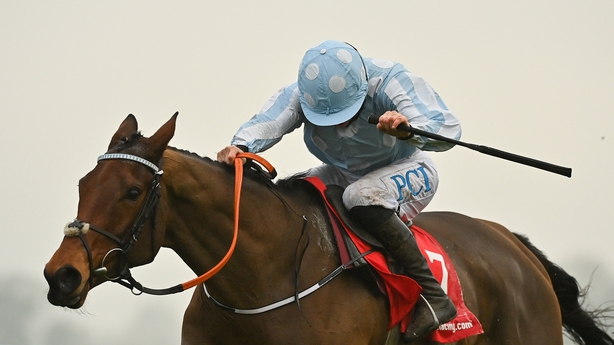 The first of six winners on the week for De Bromhead and Blackmore was the brilliant mare Honeysuckle, who stretched her unbeaten record to 11 with a runaway success in the Champion Hurdle on Tuesday.

While future plans are up in the air, connections have mooted the possibility of a career over fences, with a bid to emulate the great Dawn Run - the only horse to win a Champion Hurdle and a Gold Cup - in mind.

"It's something we'll have to give a lot of thought to and ultimately it comes down to Kenny (Alexander, owner)," said De Bromhead.

"She's an extremely valuable mare. There's probably a little bit more risk over fences, but without wanting to tempt fate, she goes off loose every Sunday morning in our indoor school and she takes off and goes off jumping for sport.

"Every Sunday morning she jumps a chase fence about four times and she loves it.

"I haven't actually schooled over fences outside, but she's a point-to-point winner and makes that shape over hurdles, so if Kenny said he'd like to go chasing - I think it's something we all need to discuss, the pros and cons, and then ultimately it's down to Kenny to decide what he wants to do."

De Bromhead, who also struck Festival gold with Put The Kettle On in the Champion Chase, Bob Olinger in the Ballymore, Telmesomethinggirl in the Mares Novices' Hurdle, Quilixios in the Triumph Hurdle, faces a period of isolation after returning to County Waterford.

He added: "It's been a bit quiet for me, as I have to quarantine for five days, but it's buzzing around the place.

"Last year we went with similar horses and a similar team. We had two winners and we were happy, (but) people were saying we'd be top trainer and things like that, but we possibly didn't quite fulfil what we had hoped we could do.

"Coming into this year, you know it could just be the same as the year before, but we ended getting what we got and it's just incredible.

"It's so tough to win there (Cheltenham). Everybody has the ups and downs of the place - that's racing to be honest, but at Cheltenham even more so as it's so competitive.

"There's plenty of ups and downs and you really appreciate the ups when you get them."

De Bromhead was also keen to praise the achievements of Blackmore, who became the first female jockey to win the Champion Hurdle and the first to be crowned leading jockey at the Festival.

He said: "She works hard and has had to work hard. She's a 10-year overnight success.

"She's had all the knocks. I know the feeling and you just have to work your way through it and try to step forward and not back.

"Rachael appreciates what it takes to be at the top of this game. She's brilliant to work with and has every race planned out.

"I thought some of her rides this week were brilliant. She's just a great rider and a great person."