Belfast Banter was yet another winner for Ireland when springing a 33-1 surprise for County Kildare trainer Peter Fahey in the McCoy Contractors County Handicap Hurdle at Cheltenham.

Ridden by Kevin Sexton, who has having his first Festival winner, the six-year-old came with a terrific run after jumping the last in fourth place to hit the front in the last 100 yards and claim the prize.

Global Citizen, Mengli Khan, Gowel Road and Fifty Ball were among the leaders in the early stages, but there was all to play coming to the second-last where Third Time Lucki made his bid.

That was covered by Milkwoodm with Petit Mouchoir, Eclat De Beaufeu, Edwardstone and Ganapathi also in the mix.

Belfast Banter made his challenge in the centre of track to land the spoils by one and a quarter lengths from Petit Mouchoir with Milkwood a length away third and Eclair De Beaufeu a head back in fourth. 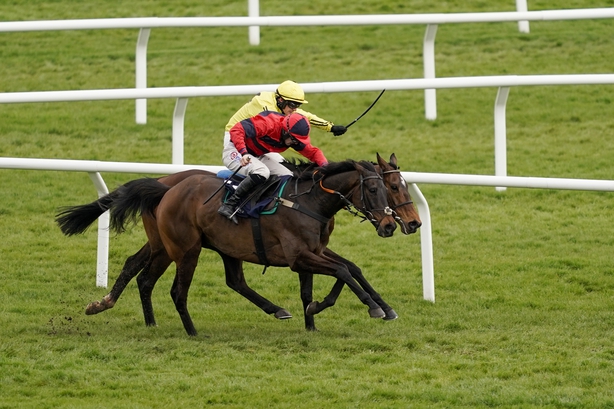 Colreevy outpointed her Willie Mullins-trained stablemate Elimay in a pulsating finish to the inaugural running of the Mrs Paddy Power Mares' Chase.

The two market leaders had the race to themselves at the business end and there was nothing between them over the final obstacles.

Colreevy (9-4), ridden by Paul Townend, gained the upper hand racing up the hill to hold the 6-5 favourite by half a length. Shattered Love was third, two and three-quarter lengths away.

They went a strong gallop from the start with Magic Of Light and Really Super making the early running, but once the tempo increased the race belonged to the Mullins pair who served up a treat in the Grade Two heat over an extended two and a half miles.

Porlock Bay and Billaway fought out a thrilling finish to the St. James's Place Festival Challenge Cup Open Hunters' Chase, with the former just prevailing in a photo.

With amateurs currently unable to ride due to coronavirus restrictions, Lorcan Williams took the mount on Will Biddick's 10-year-old, who was having just his second start in Britain after previously running in France.

Porlock Bay (16-1) could be spotted travelling supremely well from some way out, but favourite Billaway - who was second to It Came To Pass last year - proved a tough nut to crack, matching strides after jumping the last.

It was nip and tuck all the way to the line, with Porlock Bay just grabbing the glory on the nod, with Staker Wallace back in third and pace-setting Latenightpass in fourth.