Rachael Blackmore strengthened her lead in the race to be top jockey at the Cheltenham Festival with victory on Telmesomethinggirl in the Parnell Properties Mares' Novices' Hurdle.

It was her fifth of the week and second on the day after winning the Ryanair Chase on Allaho.

Like Allaho and Honeysuckle in the Champion Hurdle on Tuesday, Telmesomethinggirl was trained by Henry de Bromhead. The County Waterford-based trainer was also responsible for the runner-up Magic Daze, who made the running and did not give up when headed.

However, Robbie Power's mount had no answer to the finishing flourish of Telmesomethinggirl (5-1).

Bounding up the hill, the six-year-old took the Grade Two contest by five and a half lengths from her stablemate. Mighty Blue was a length and a half away in third place.

Blackmore said: "It's overwhelming, to be honest. Henry's done an unbelievable job with her, he always thought a lot of her and she showed it today. She's got speed as well as everything else, she jumped brilliantly everywhere and she settled better than she had done before.

"I wish I could give you something really good, but I'm genuinely just so overwhelmed by these last few days. It's all about the horses you're getting on and I've just been so lucky to be riding for the people I'm riding for." 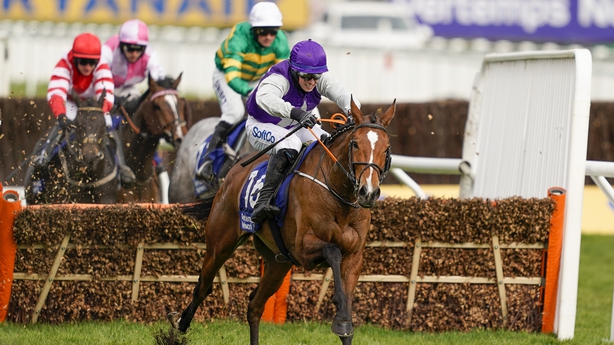 The six-year-old asserted on the run to the line to land the three-mile stamina test in comfortable fashion and give Nolan a first win at the Festival since 2011.

Redford Road and Potters Hedger were the pace-setters and there were plenty in with chances as the big field approached the penultimate flight.

Mrs Milner was produced through the pack to lead before the last. Despite the attentions of a loose horse, the 12-1 chance kept on strongly to win by five lengths from The Bosses Oscar.

Come On Teddy was half a length back in third, with another length and a half to Milliner in fourth. The Shunter landed a £100,000 bonus as he triumphed in the Paddy Power Plate Handicap Chase.

Emmet Mullins' charge won the Morebattle Hurdle at Kelso last time out, putting him in line for the bumper windfall if he could follow up in any race at the Festival.

The Shunter was sent off the 9-4 favourite in the hands of 7lb claimer Jordan Gainford and travelled supremely well throughout, racing prominently before kicking on at the turn for home.

Farclas tried to reel him back on the run to the line, but The Shunter was not for passing, with Top Notch also staying on back in third.

Reacting to the win, Gainford said: "It's unbelievable, I can't describe it, to be honest. Massive thanks to Emmet Mullins for letting me ride him and Mr Byrne, the owner. On a big day like this, for a 7lb claimer, it's a massive opportunity. I'm just delighted it came off.

"He was stepping up in trip today and I thought that was the key to him. I gave him a squeeze at one or two but he likes to do his own little thing.

"To be honest, he took me there, I was there way too early. He started to wander, he'd have loved a bit of company down to the second-last, but he's battled after  the second-last and after the last again.

"It's unbelievable - a big thanks everyone at home for all the opportunities I've got."

Emmet Mullins added: "It just fell into place, one step after the next.

"To be fair to Paul (Byrne, owner), he put it on the radar at Christmas time I think. We were minding his hurdle mark, so we ran over fences at Leopardstown."

The Shunter had multiple entries over the Festival, and Mullins added: "We got the right choice, I don't know why we picked it, but we got it right."

Leading two out in the hands of Jack Kennedy, the 3-1 favourite gradually went clear to give Denise Foster a second Festival winner after taking over the licence at Gordon Elliott's Cullentra House Stables.

Kennedy said: "I was lucky they were going quick, she was doing her best work at the finish.

"We thought she'd stay, but I'd planned it going a bit smoother in the early part. I just had to make do what I could from there, luckily I had a very willing partner.

"We were hoping she'd run a big race, we thought she might be thereabouts if things went smoothly, but I thought my chances were out of the window after four fences.

"At the top of the hill I was fairly happy and I ended up getting there too soon.

"It was a massive thrill, especially after the day I'd had, probably one of the most satisfactory winners I've had."