The remarkable Tiger Roll stormed to his fifth Cheltenham Festival victory and his third in the Glenfarclas Chase.

The 11-year-old dual Grand National winner returned to his best form, as a 9-2 shot here, to hand out an 18-length trouncing to even-money favourite Easysland - taking revenge on the French challenger for his defeat behind him in this race 12 months ago.

Tiger Roll will not be heading back to Aintree this year, having been taken out of the race by owners Gigginstown House Stud because they considered his handicap mark too high for him to have a chance of adding to his back-to-back titles there.

In the care of Denise Foster during long-time trainer Gordon Elliott's well-chronicled ban, Tiger Roll was prominent throughout under Keith Donoghue and simply went further clear towards the end of the marathon contest - with Easysland his closest but vain pursuer. Some Neck was third.

A fifth win at The Festival for Tiger Roll#CheltenhamFestival pic.twitter.com/kkSiF8vMjT

Donoghue, a three-time winner of this race too thanks to Tiger Roll, was in awe of the latest performance.

"It's unbelievable for him to come back and do it again," he said.

"I'm just speechless - it's absolutely brilliant. He means everything to me. If it wasn't for this horse, I wouldn't be riding. It's as simple as that.

"Never underestimate the Tiger - a lot of people underestimated him. We all kept the faith in him - we know the horse he is, and he showed us that today.

"He loved it, and that's the Tiger we've seen at home. I'm delighted he showed that on the track today. He's just a legend." 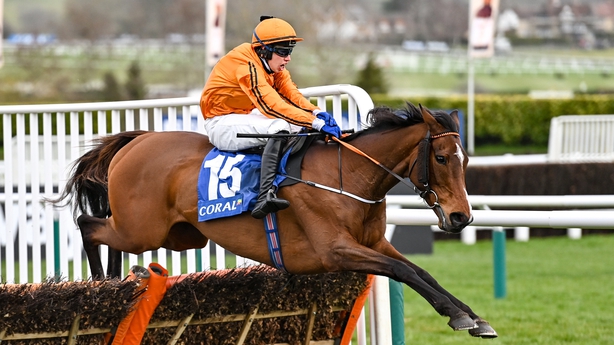 Outsider Heaven Help Us (33-1) was a runaway winner of the Coral Cup.

Young jockey Richard Condon pulled off a perfect front-running ride, with the help of his 7lb claim, to dominate what is traditionally the most competitive of handicaps from start to finish.

Heaven Help Us, trained by Paul Hennessy in Co Kilkenny, was clear almost from the outset, but not at a manic pace in such a big field, and well in control at the last when her nearest pursuer Blue Sari came down.

The winner had nine lengths to spare at the line - followed home by Craigneiche, with another outsider Tea Clipper running well to be third, another two and a quarter lengths back.

Hennessy said: "It's unbelievable, quite incredible to be honest.

"We had a plan, something similar to Leopardstown. There were probably 26 Plan As in the race, but at least we got to use our Plan A.

"Richie was absolutely incredible on her – I don’t think anyone could have ridden her any better than that.

"Training greyhounds is our career. We have about 40 and we were lucky enough to win a couple of English Derbys.

"I only train three horses. It’s off the planet to win here – I can’t believe it.

"We needed a miracle. Heaven Help Us is her name and heaven has helped us today."

Sky Pirate (14-1) just held off the late thrust of Entoucas to land a blow for British-trained horses at last on St Patrick's Day in the Johnny Henderson Grand Annual Challenge Cup Handicap Chase.

Nick Scholfield was back on board, after missing Sky Pirate's two mid-winter victories because of injury, and the partnership showed great tenacity to win by a short-head.

Entoucas still appeared to be full of running at the last but just could not quite reel in Jonjo O'Neill's winner in time. Ibleo stayed on to be almost four lengths further back in third.

O'Neill was full of praise for Scholfield.

He said: "That was great, and Nick gave him a fantastic ride – he jumped quick and slick, and everything went right.

"He likes it here, he obviously stays (further) but is much better off a fast pace at two miles. That plays into his hands, because he travels and does everything nicely."

A shot at the Arkle this week was in the reckoning at one stage, but O’Neill chose the handicap option.

"I thought it was a good run at Warwick behind Allmankind, and he likes the track here, so it all went well – and the plan went right.

"He might have to take a step up in grade now – who knows until you try – but he was in great form coming here. That was the plan, so we’ll see what happens."