Dual King George hero Clan Des Obeaux, who won a rescheduled running of the Denman Chase at Ascot two years ago, was the 6-5 favourite to get back on the winning trail, having finished third when bidding for a hat-trick in Kempton's Boxing Day showpiece on his latest outing.

However, just as he did in the King George when Frodon claimed the prize, the nine-year-old had to make do with minor honours as a lesser-fancied stable companion made every yard of the running under Bryony Frost.

Secret Investor was a 14-1 shot, but jumped and travelled with zest to keep the pressure on the chasing pack.

Clan Des Obeaux loomed up looking a big threat under Harry Cobden, but Frost's mount refused to bend on the run-in and after a titanic tussle, it was Secret Investor who found most for pressure to win the day by a neck.

While the race is viewed as a Cheltenham trial, Aintree was uppermost in Nicholls' mind after the race.

He said: "I couldn't see that happening, but having said that, he ran well in it last year and just kept galloping.

"I wouldn't be surprised if both head now to Aintree for the Bowl.

"I told Bryony to ride him from the front because we wanted a good pace for Clan, but Harry said his horse was just carrying his head a bit high, which leads me to think we should put cheekpieces on him next time.

"It's something we've considered to sharpen his mind and we gave him the benefit of the doubt until today."

Aintree is also on the agenda for Nicholls' Ascot Chase runner-up Master Tommytucker, although plans are undecided for stablemate Cyrname who was pulled up in the same race.

He said: "Master Tommytucker has some out of Ascot very well and will now go for the Melling Chase at Aintree, but with Cyrname he just can't breathe and we'll have to see with him."

There was a sad postscript to the Denman Chase as the David Bridgwater-trained The Conditional suffered a fatal injury, with Nicholls expressing his condolences.

He added: "I was very sorry to see Bridgy lose his stable star just now and we all feel for him."

Nicky Henderson was thrilled to see Champ enhance his Cheltenham Gold Cup credentials in defeat after finding only Sceau Royal too strong in the Betfair Game Spirit Chase at Newbury. 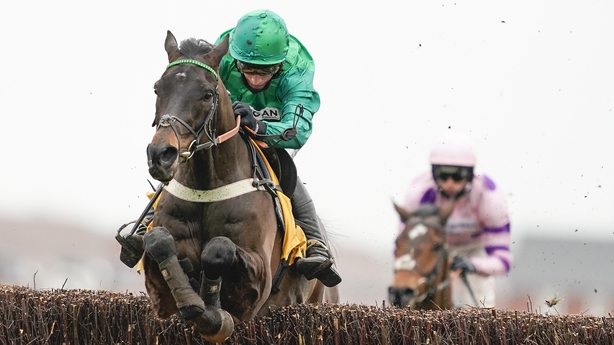 Having been off the track since claiming a last-gasp victory in what is now the Brown Advisory Novices' Chase at last season's Cheltenham Festival, the JP McManus-owned Champ was originally due to make his long-awaited return in the three-mile Betfair Denman Chase.

However, with Newbury's Betfair Super Saturday card pushed back eight days after the original fixture was frozen off, Henderson made the surprise decision to instead run Champ over an extended two miles in the Game Spirit, due to the meeting's proximity to the Festival.

Ridden forward by Nico de Boinville back over this shorter trip, Champ travelled with zest and jumped with accuracy, before eventually being reeled in by Alan King's proven two-miler Sceau Royal (3-1 favourite) and Daryl Jacob.

"He's enjoyed himself there and he's clearly not slow," said a delighted Henderson.

"The great thing was his jumping - it was deadly - and that will have done him the world of good.

"We boxed him over to Henrietta Knight's the other day and he's gone three times either way in the loose school. That (his jumping) needed ironing out and it clearly worked.

"He's an exciting horse and much better on a racecourse than at home. You wouldn't give two and sixpence for him on the grass gallop, but when he gets to the racecourse it's like flicking a switch and he's on the case full wallop!

"He's got so much natural pace and he's versatile. It was better to give him a kinder race today than go three miles, but on the evidence of the RSA last year, we know he stays."

Bookmakers were clearly impressed by Champ's display in being beaten just two lengths, cutting him to 6-1 from 8-1 for for the Gold Cup on 19 March, making him their second-favourite behind dual winner Al Boum Photo.

Henderson added: "He was on the bridle until the second-last and now we have two days short of a month until the Gold Cup.

"We are now very much looking forward to Cheltenham with him."