Kemboy made every yard of the running to win the Paddy Power Irish Gold Cup at Leopardstown.

Agonisingly caught close home by A Plus Tard in the Savills Chase at Christmas, this time he was allowed to dominate throughout.

Ridden by Danny Mullins, with Paul Townend preferring the claims of the unplaced Melon, Kemboy only briefly looked in danger on the run to the second last.

Rachael Blackmore moved the favourite Minella Indo to within a length of Kemboy but hit the fence hard, handing back the initiative to Kemboy and he never looked likely to relinquish it.

Willie Mullins, who has mopped up the Grade One contests over the weekend, had feared the ground would be too soft for the nine-year-old, but he did not look inconvenienced in the slightest.

Kemboy jumped the last in fine style and kept up the gallop to win by two lengths from The Storyteller, with Delta Work third.

Mullins said: "That's fantastic for Danny and his owners.

"He’s really surprised me on that ground. The chase track is a lot better than the hurdle track and they went up the middle, which is better again.

"I thought all the rain we had might have affected that fella, but he seems to be getting stronger with age.

"I had Paul (Townend) down on this guy and Patrick (Mullins) down to ride the other guy (Melon), but Paul said he’d like to ride Melon.

"Different tactics didn’t work on Melon, I’d say he just likes to enjoy himself and get on with it. Melon keeps his best for Cheltenham, but hasn’t managed to get to the lollipop in front yet (four times second at the Festival).

"We’ll have a think with (owner) Mr Donnelly about Melon, maybe something like the Ryanair might suit, and let him enjoy himself from the beginning – that might suit him better.

"Danny got some great leaps out of the winner, I only spotted one mistake on the first circuit. Rachael came after him down the back, but his jumping got him out of it.

Mullins admitted a switch back to smaller obstacles at Cheltenham remains a possibility, despite his victory.

He added: "He’s entered in the Stayers’ Hurdle as well as the Gold Cup, as I’m just not sure if fences are his thing around Cheltenham. We were all wondering if we should try something different as Cheltenham hasn’t been his luckiest spot."

Danny Mullins said: "Myself and David (Mullins, recently retired jockey) were chatting after the race at Christmas and he said he’s not fast, but is a great galloper and this is a ride he would probably have had, so it’s thanks to him that I am on board today.

"It’s great to be winning these high-level races at the big meetings, it’s what it’s all about and riding a good horse like this is fantastic." 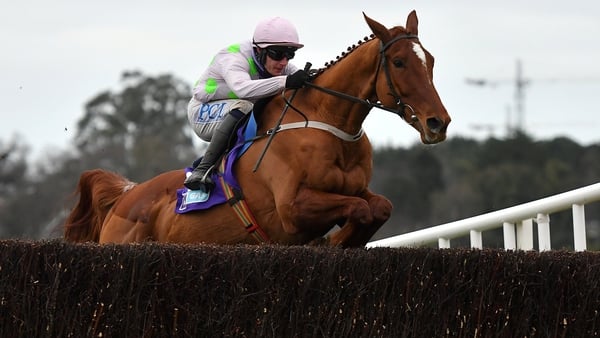