Willie Mullins' nine-year-old enjoyed his usual preparation recently with a straightforward victory at Tramore and will head straight to Prestbury Park in his bid to emulate the likes of Arkle, Best Mate and Golden Miller as a three-time winner of the blue-riband event.

Mullins has a host of other contenders for the showpiece event on March 19, including Kemboy, Melon and Allaho, who were second, third and fourth respectively in the Savills Chase at Leopardstown.

The winner of that race was Henry de Bromhead's A Plus Tard, already a Cheltenham Festival winner in the past and who was placed in the Ryanair last year. However, the betting indicates at the moment De Bromhead has an even better chance with Minella Indo, who was caught close home in the RSA Chase last season but was an early faller in the Savills Chase.

It was Nicky Henderson's Champ who flew up the hill to catch him in the RSA and although he has not run since, he remains one of the leading contenders for the Gold Cup.

Henderson also has last year's narrow runner-up Santini, winless in two outings so far this season, while Gordon Elliott is keen to get another run into Delta Work, Samcro and Presenting Percy after they failed to trouble the judge over Christmas.

Frodon booked his spot in the Gold Cup when making all the running in the King George VI Chase on Boxing Day under Bryony Frost and has been entered by Paul Nicholls along with Cyrname and Real Steel.

Waiting Patiently ran a fine race for North Yorkshire trainer Ruth Jefferson at Kempton to chase Frodon home, on what was his first racecourse appearance in over a year.

Outlining options for her stable star, Jefferson said: "Waiting Patiently is very well at home and has come out of the King George absolutely bouncing.

"We have decided to enter him in all of the possible targets at the Cheltenham Festival just to keep our options open - at least for now. The Champion Chase, Ryanair Chase and the Gold Cup are all championship races and it just makes sense at this stage to keep him in all three.

"We still don't know how far he will be dropped back down in trip so the Champion Chase comes into the equation and he has got an entry for that.

"The Ryanair Chase is obviously another race to consider, whilst the Gold Cup, given these uncertain times, could be an interesting race.

"With so much going on, entering in all three races just keeps our options open and then we're not tied down about having to go for one particular race.

"He will probably run again before Cheltenham, but where we go is something we are still discussing. The Ascot Chase was originally the race I had pencilled him in for, but I don't know whether that will then be too close to Cheltenham and it therefore becomes difficult to run in both.

"With that in mind, I am not sure where we will go next at the moment, but I would like to get another run into him before Cheltenham." 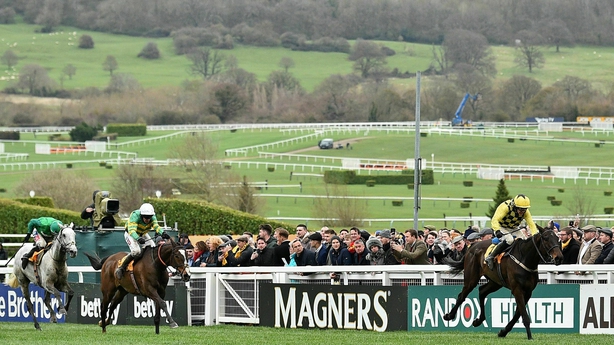 Bristol De Mai won his third Betfair Chase in November and may have another crack at a race in which he finished third in 2019 before possibly heading for the Grand National.

Trainer Nigel Twiston-Davies said: "Bristol De Mai is fine, he has just been ticking over since Haydock so he is fresh and well.

"He didn't win this Betfair Chase by as far as his others, but it was a very classy field he beat and he did it well.

"I don't know whether he goes to the Cotswold Chase. He could go there or wait. It's a bit up in the air.

"I would like to look at the Gold Cup, but if all the others turn up we might side-step it and go for the National.

"He was third in it (Gold Cup) before and he is right up there on ratings. He has been to the Gold Cup a few times, but has not won it yet. If he goes there hopefully he can prove them all wrong this year."

Saint Calvados, Lostintranslation, Native River and Imperial Aura and among a host of other interesting possibles.

While that performance at Kempton was no doubt his career highlight, he will also be remembered for the dramatic way in which he won the RSA Chase a season earlier when holding off stablemate Whisper by a nose.

Over 10 lengths clear jumping the last, Might Bite veered badly to his right up the run-in, giving Whisper a chance, only to pick up again in the final strides to cling on for victory.

He went on to be second in the 2018 Gold Cup to Native River, yet despite winning at Aintree that year he failed to reproduce that form in subsequent seasons.