Aidan O'Brien holds a strong hand in the Emirates Melbourne Cup with Anthony Van Dyck and Tiger Moth as he aims to break his duck in the famous race at Flemington in the early hours of Tuesday.

He has had various horses placed in the race, but the closest he has come is 2017 when Johannes Vermeer was beaten half a length by Rekindling, trained by his son Joseph.

While O'Brien has tended to run those guaranteed to stay the trip - his four-time Ascot Gold Cup winner Yeats finished seventh in 2006 - this year he is sending different types.

Anthony Van Dyck came out on top in a blanket finish to win last year's Derby at Epsom and won his first race since then in September in the Prix Foy, and was then second in the Caulfield Cup, while Tiger Moth has had just four runs in his life, but he was second in the Irish Derby in June.

"They are two very nice horses we sent this year - a Derby winner and an Irish Derby runner-up," said O'Brien.

"We were very happy with Anthony Van Dyck's run in the Caulfield Cup.

"Tiger Moth obviously hasn't run over there but he ran an excellent race in the Irish Derby and won well the race before he left to go to Australia.

"There wasn't really any other race he could run in, and he was just getting in the Melbourne Cup with a nice weight, so we decided not to run him (beforehand).

"They've been very happy since he's been down there - everything is very good with him, and I suppose there's just another canter to go. I'm hoping they both run well." 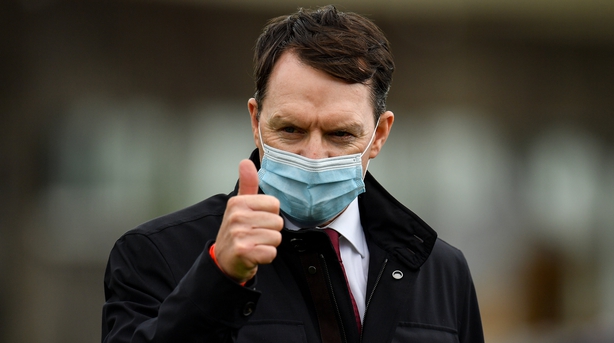 Because of travel difficulties presented by the pandemic, none of O'Brien's usual jockeys are making the trip.

But he has employed two of the best Australia has ever seen in Bowman, known for his association with Winx, and Kerrin McEvoy, familiar to an Irish audience thanks to his ties with Godolphin.

"We've got one drawn inside (Anthony Van Dyck in three) and one on the outside (Tiger Moth 23) - so who knows, we'll see how that plays out," added O'Brien.

"I'll be speaking to both Hugh and Kerrin before the race, and see what the lads think.

"I'm delighted to have the two of them - they are two great riders with great experience."

Asked if he has modified his approach to the race this year, he said: "I'm not sure. I've obviously never won it, but we've taken some very good horses out.

"These are two high-class colts who get a mile and a half well, so we'll see how they do. It's always a great race - different this year with no crowd I'm sure, but exciting all the same."

Charlie Fellowes is becoming something of a celebrity Down Under thanks to the exploits of Prince Of Arran, who has been placed in the race for the past two years.

"Melbourne has been a huge part of my life for the last two years.

"I'd give a lot to be there right now, but there are bigger things going on in the world.

"The horse has done it all before. He knows what to expect, and I know everything is being done as if I was there."

Prince Of Arran is in stall one and will be ridden by Jamie Kah - the same stall from which Prince Of Penzance left, when creating history under Michelle Payne in 2015.

"The more I think about stall one the happier I am," Fellowes added, on Australian radio station RSN.

"He's clever, he's seven - and there's a reason he's still at the top of his game, he's looked after himself by only doing what he has to, so an inside barrier makes life easier.

"When he gets too much daylight that is when he thinks it is job done. If he flops out of the gate we might have a problem, but I'm pretty confident that is not going to happen.

"The last two years, our 'Derby' has been the race before the Melbourne Cup - to get into it. This year we've known we were going to be in, so I've almost been able to take my time and we've kept him fresh - knowing the first Tuesday in November is the day that really matters.

"Obviously Michelle Payne won it on Prince Of Penzance from stall one, so we're hoping Jamie can win from stall one on another Prince. Jamie is on a roll, and everything she sits on she thinks she's going to win."

Sir Dragonet, formerly housed at Ballydoyle and winner of the Cox Plate, is the shortest-priced of the home contenders.