The Tony Mullins-trained German import Princess Zoe made light of a significant hike in the weights to power away from her rivals in the Connacht Hotel (QR) Handicap on the opening evening of the Galway Races at Ballybrit.

The Tony Mullins-trained German import Princess Zoe made light of a significant hike in the weights to power away from her rivals in the Connacht Hotel (QR) Handicap at Ballybrit #RTEracing pic.twitter.com/IV5hRVZqxV

Finian Maguire was rousting his mount along some way out in the day's feature, but stamina is clearly the strong suit of the daughter of Jukebox Jury, and she flashed home to score by a length and a quarter at 7-1.

Many bookmakers were paying out on the fifth in the amateur handicap as a concession, with Grandmaster Flash (20-1) filling the bonus place.

Princess Zoe won the Ladies Derby at the Curragh on her most recent start and she again emerged best in a thoroughly competitive event over two miles and a furlong.

Sharjah, second in the Champion Hurdle and a three-times Grade One scorer over obstacles, was sent off favourite for the combination of Willie and Patrick Mullins.

He was settled towards the rear of the field as A Wave Of The Sea set the early gallop and there were plenty still in with a chance as the race began in earnest with a couple of furlongs to run.

Sharjah tried to make his run down the outside but could not pick up as Maguire waited for a gap before Princess Zoe fairly sprinted through to collar Run For Mary for the prize.

The five-year-old was winning for the second time in three starts for Mullins since switching from Germany earlier in the year and she was also a landmark winner for Maguire, who has now lost his claim.

Mullins said: "Bernard Cullinane found her for us in Germany, but when I saw where she was for sale, with the flights being so difficult, I decided not to go on that journey and very luckily I didn't go, because I know if I went I wouldn't have bought her.

"When she arrived home she had quite crooked legs and I know if I went to Germany, I wouldn't have bought her. Thankfully I bought her on the phone and when she arrived, I couldn't do anything about it. But the first day I worked her, I knew we were OK.

"I've known Paddy (Kehoe, owner) 40 years and we've had great luck together. The few we've bought over the years, nearly every one won.

"We are now thinking of the English Cesarewitch and we might also think about a bit of black type as she has a good pedigree. She is entered on Saturday and is a good filly and I want to go right by her.

"Paddy already has her backed for the mares' novice hurdle at Cheltenham, so I suppose she'll be schooled.

"To win a feature race at Galway is like a Cheltenham winner to me, or having one at Royal Ascot. With the type of horse I have, it is the best I can aspire to win and we have won a few features over the years."

Dermot Weld made his customary flying start to the seven-day meeting with a double. 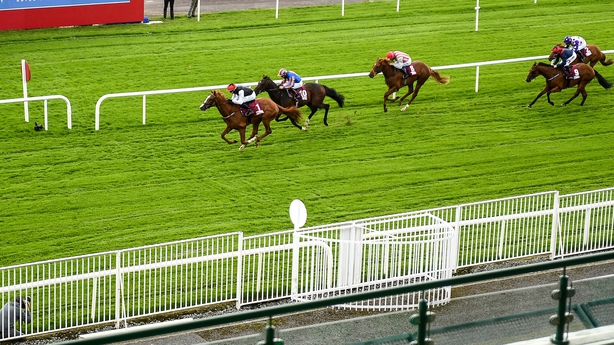 Blue For You (8-1) got the ball rolling as he took the opening Claregalwayhotel.ie Irish EBF (C&G) Maiden, giving the handler a remarkable 24th overall win in the seven-furlong heat and his 11th victory since 2000.

Blue For You  broke well from his inside draw, but soon lost his spot on the rail and was taken back by Oisin Orr.

Wembley (6-5 favourite) kicked for home in the straight but he was reeled in by Blue For You, who was delivered with a strong late run down the centre of the course to score by three-quarters of a length.

"We hoped he'd run well, but obviously others appeared to be in better form coming into the race," said Kris Weld, assistant to his father.

"He had to improve from his first run, but we were optimistic he'd handle the ground when the rain came as his dam won in Cork the same day Harzand won his maiden and the ground was very soft.

"It did look unlikely in the dip and he is still a big, raw horse. He toughed it out well and has shown a good attitude and hopefully he'll be up to Stakes level.

"Dad stayed away but might appear at some stage during the week, maybe tomorrow."

Centroid (4-1), a Dansili half-brother to King George record breaker Enable, made it a double with a narrow verdict in the Easyfix Handicap.

Gavin Ryan went for home at the top of the straight and he was all out to hold the fast-finishing Penny Out by a nose in a photo.

Weld said: "He is a half-brother to Enable and obviously isn't up to her class, but it was nice to get another win with him.

"It all happened a bit too soon, but he had to take the run (through on the inside) when he got it and he has held on well at the line. It's Gavin's first winner for us."

Talking Tough (11-2) ran out a ready winner of the Claytonhotelgalway.ie Handicap.

Billy Lee, riding the horse for the first time, brought the Mick Mulvany-trained gelding to head long-time leader Kokura in the final furlong.

Talking Tough was soon clear and had enough in hand to keep the strong-finishing Soaring Monarch at bay by three-quarters of a length.

Mulvany said: "Billy said they went good and hard early on and when he hit the hill, the rising ground helped him. He did the same at Sligo when he finished well and that is the secret to him.

"We are giving him plenty of racing, but he is still a little ball of a horse and saves a little bit for himself all the time.

"We'll have to think about running again later in the week with him.

"It's a different feeling to have a winner tonight - normally there'd be an army load of us who'd come up for the week and would give it welly. Some are still coming (to Galway), but they're not here and can't really enjoy it."

Lee completed a quickfire double when making all the running on Royal Canford (7-2) for trainer Willie McCreery in the Galmont.com & Galwaybayhotel.com Handicap Division One.

"She had a good run here (when second) last year over a mile and I knew I had speed because she won over six furlongs at the Curragh making all," said Lee.

"I had a very good draw, I was keen to make use of it as I didn't see a whole lot of pace in the race and I was able to dictate.

"She is a bit quirky and has the blinkers on, but when you have her on a going day she is hard to pass."

Trainer Sean Byrne said: "He is a nice horse who wants soft ground and that's his ninth win. He had already won one and was second for me and he is in again on Sunday."

Flying Scotsman (10-3 favourite) claimed the Eventus Handicap for Joseph O'Brien and Wayne Lordan and he could turn out at the track again on Tuesday.

Assistant trainer Brendan Powell said: "It wasn't the greatest race in the world, but has got his head in front now. He is in tomorrow so we'll leave that to Joseph and see what he is like (in the morning). He is back over a mile tomorrow."