Santiago was a 14th winner of the Dubai Duty Free Irish Derby for Aidan O'Brien - who trained the first four home in this year's Classic at the Curragh.

Santiago, successful in last week's Queen's Vase at Royal Ascot, justified 2-1 favouritism to win by a head from stablemate Tiger Moth, with Dawn Patrol third and Order Of Australia back in fourth.

Seamie Heffernan held Santiago up well off the pace in a race run in deteriorating conditions as the weather closed in.

But they swept through runners from two and a half furlongs out to take over from another O'Brien contender, Iberia, and went clear before holding off the significant late challenge delivered by Emmet McNamara on Tiger Moth.

The winning margin diminished towards the post, but Santiago stuck to the task well, passing the line a head in front.

O'Brien told RTÉ Sport: "Santiago is a lovely, straightforward horse. He likes to take his time in his races and Seamus got a lovely run through and stayed very well.

"I think so (go for the St Leger), it looks a lovely race for him. We have the second and the third there too, so we will see what the lads want to do.

"They are two lovely horses (Tiger Moth and Dawn Patrol) and are two babies, they are progressing. In a month's time they will be even better we think."

He added: "Seamus is a great fella, lots of experience and works hard. We are delighted for him. He knows the horses very well.

"Great credit to everyone for getting it on and getting racing back." 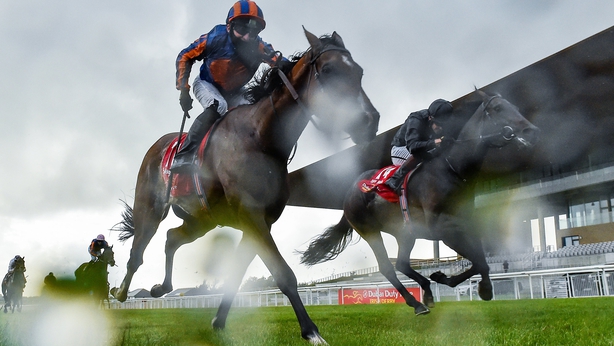 Heffernan, winning the race for the fourth time, said: "He's a tough horse - a mile and six (in the Queen's Vase at Royal Ascot) back to a mile and a half in the Curragh really suited me. I was always comfortable.

"I would have liked to have had a better draw and a cleaner slot, but it worked out.

"It wasn't an ideal draw and I took a gamble in dropping him in, but if you go forward and you get trapped wide he's a horse that gets competitive. He wants to go and race and win."

Coolmore's MV Magnier, speaking by Zoom video link, said: "I'm delighted for Seamus. I didn't realise that he's 47, but he's riding very well and has been working in Ballydoyle for a long time. He deserves it.

"The Irish Derby is the pinnacle of Irish racing. It is a stallion-making race and many great champions have won it over the years."