Santiago produced an improved display to give Aidan O'Brien a seventh victory in the Queen's Vase at Royal Ascot.

The Ballydoyle handler saddled two runners in a bid to add to his previous triumphs in the Group Two feature, with Ryan Moore partnering Santiago and Frankie Dettori aboard Nobel Prize.

The pair raced in unison for much of the contest and travelled kindly into the home straight, with 100-30 chance Santiago - not seen since landing a Listowel maiden in September - covered up in behind the leaders.

Once switched wide by Moore, the son of Authorized quickened smartly to grab the lead and put the race to bed with relative ease.

Berkshire Royal attempted to close the gap racing inside the final furlong, but Santiago never looked in any real danger of being reeled in and passed the post two and three-quarter lengths to the good. Al Dabaran was over eight lengths further back in third.

He looks like a colt with a big future for the @coolmorestud team #RoyalAscot pic.twitter.com/p2RLbSBiHd

"We've been thinking he was an ideal St Leger horse so we'll look for another run somewhere between now and then really.

"I'm not sure he'd run in a Derby as he could be a Cup horse for next year - he'll get better from three to four.

"We've plenty for both Derbys, the Irish Derby would come too quick anyway but we'll see what the lads want to do.

"We think he'll be a horse for the Cup races next year so that is why we thought this race would suit him."

Fanny Logan had earlier come from last to first to claim a decisive victory in the Hardwicke Stakes - the 70th Royal Ascot win of Dettori's career.

John Gosden's filly won a hat-trick of Listed races and a Group Three last season, before rounding off her campaign with a fourth-placed finish at the Breeders' Cup.

After being beaten at cramped odds on her reappearance at Haydock earlier in the month, the four-year-old appeared to have plenty on her plate against the boys in this Group Two event, but proved more than up to the task in the hands of Dettori.

Ridden patiently, the 17-2 chance was at the very rear of the field rounding the home turn before throwing down her challenge widest of all.

Fanny Logan ate up the ground quickly once finding top gear and came home two and a half lengths ahead of 40-1 shot Alounak, with Defoe a clear third.

Last year's Investec Derby hero Anthony Van Dyck (9-4 favourite) failed to get a run at a crucial stage in the home straight and was unable to reach a challenging position, while his chief market rival Elarqam was a shade disappointing after having every chance.

A great moment for @FrankieDettori as Fanny Logan lands the Hardwicke Stakes to give him his 70th Royal Ascot winner! ??#RoyalAscot pic.twitter.com/ofg0v9vmzp

Gosden said: "It wasn't a fluke. At Haydock I asked Rab (Havlin) to drop her out and she ran a lovely race to finish second and after it she had a good blow so we knew she'd come on for it.

"She's been very bright since. Frankie had a plan to make the running today, but I told him I didn't think that was a good idea so he sat out the back, rode her coolly, swept down the outside and she's clearly the best on the day.

"He's riding as well as ever, belying his years and it's a pleasure to be around him for his knowledge and feel. He's a great race-reader." 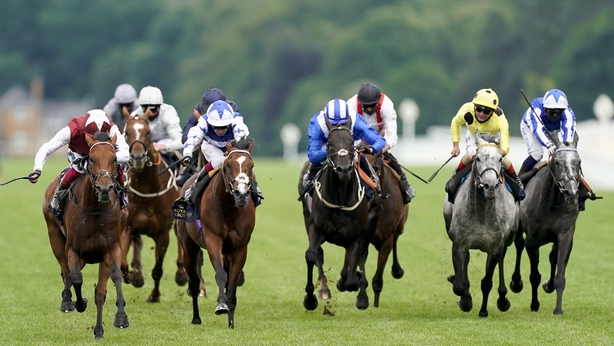 Dettori - hitting another special milestone in a glittering career - said: "John gave me a lot of confidence as he said she came out of Haydock really well.

"I was further back than I wanted, but they started racing really early and by the time I got to the furlong marker they were all dead. She showed a good turn of foot.

Art Power proved far too good for his rivals in the Palace of Holyroodhouse Handicap, the opening event on day four of Royal Ascot.

Trained by Tim Easterby and ridden by Silvestre de Sousa, Art Power was sent off the 6-4 favourite for the five-furlong heat after winning at Newcastle on his return.

He was clearly in control with a furlong to run and bolted clear of Keep Busy to run out an impressive winner, with Dancin Inthestreet keeping on for third.

Another to have won at Newcastle since racing resumed, Dandalla could be noted travelling well a couple of furlongs out and when Curtis asked the question, the 13-2 shot responded in style.

Pulling clear in the final furlong, she easily accounted for Setarhe to earn quotes of 16-1 for next year's 1000 Guineas.

Wesley Ward's American raider Golden Pal was smartly away and looked set to make every yard in the Group Two prize under Andrea Atzeni.

However, Oisin Murphy was not for giving up on The Lir Jet and his efforts paid dividends in the final half-furlong as the Michael Bell-trained colt just edged in front by a neck.

Imperial Force took third while hot favourite Eye Of Heaven finished out of the frame.

Hollie Doyle added her name to the Royal Ascot record books by becoming only the third female rider to partner a winner at the showpiece meeting, as she stormed home aboard Scarlet Dragon (33-1) for Alan King in the Duke of Edinburgh Stakes.

Doyle - who already holds the record for number of winners ridden in a calendar year by a female - joins Gay Kelleway and Hayley Turner on the Ascot roll of honour.