On 14 April 2018, Tiger Roll completed his unlikely transition to Grand National hero as he triumphed in a thrilling finish to the Aintree feature.

By a Derby winner and a half-brother to a Lonsdale Cup victor, Tiger Roll looked destined to make his mark on the Flat when bought by Godolphin for 70,000 guineas as a foal in 2010.

However, he never even ran in the famous blue silks and after changing hands again and winning once for former Grand National-winning rider Nigel Hawke over hurdles, Tiger Roll was snapped up by Michael O'Leary's Gigginstown House Stud for £80,000 (€92,000) and his journey to Aintree really began.

It was far from a straight line though, with Grade One glory in the 2014 Triumph Hurdle at Cheltenham followed by a tough first season in full company and a swift switch to fences, where he again secured a Festival win in the National Hunt Chase over a marathon four miles.

That win set the wheels in motion for trainer Gordon Elliott, who then plotted a route to Aintree the following season that included a warm-up win in the cross country chase at the Festival.

Lining up as a 10-1 shot in the National, Davy Russell sat quietly through the early stages and had to survive a slightly hairy moment when he lost his irons, but he looked a likely winner when bounding into the lead after jumping the last.

Around six lengths clear at the famous elbow, Tiger Roll started to toil on the long run to the line and it looked as though the relentless Pleasant Company was going to grab the glory.

However, Tiger Roll stuck his neck out gamely to triumph by a head and spark joyous celebrations for Elliott and O'Leary. 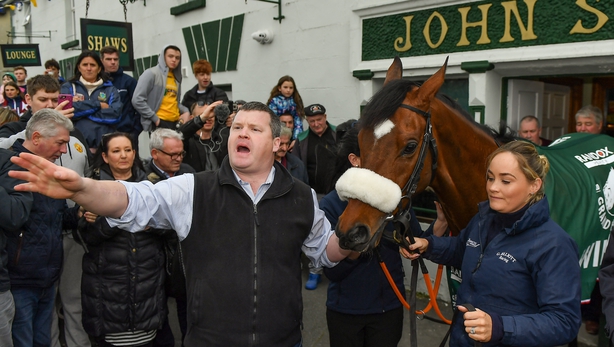 Indeed, O'Leary extended the party on his Ryanair flight home that night, offering all the passengers on the plane back to Dublin a free drink in acknowledgement of Tiger Roll's success.

Tiger Roll took the same route to Aintree in 2019, bagging another Festival success before rolling on to the National, where he became the first back-to-back winner since Red Rum in 1973 and '74.

Two wins is enough to ensure Tiger Roll goes down as a National legend, but he was on course to bid for a third when the coronavirus pandemic saw the meeting called off.

Elliott remains hopeful of the chance at a hat-trick in 2021.