Davy Russell and Samcro (4/1) held off Patrick Mullins on Melon in a photo finish to win the Grade One Marsh Novices Chase in the opening race of Day 3 at the Cheltenham Festival.

The pair flashed past the line almost inseparable, but Gordon Elliott's charge Samcro rallied when he had to and won by barely a whisker - officially a nose.

Willie Mullins had second and third as old stager Faugheen battled gamely to take a place having led in the early stages.

What a horse race - and what a finish ??

Samcro beats Melon by the narrowest of margins to land the G1 Marsh Novices' Chase in a pulsating drive to the line!#CheltenhamFestival pic.twitter.com/2inc1Lgsfx

It was redemption for Samcro, who lost his form so alarmingly at times following his 2018 Ballymore Novices' Hurdle victory but has now doubled his Festival tally.

Sent off the 3-1 favourite, Faugheen was away smartly, but Reserve Tank and Poker Play made the early running before Melon joined the leaders before the fifth fence.

There was early drama when Itchy Feet blundered and unseated Gavin Sheehan at the sixth fence.

Samcro travelled well and there was all to play for until Faugheen made a mistake three out that cost him ground at a crucial time.

It left Samcro and Melon ahead of the pack with the former, wearing the Gigginstown House Stud colours, prevailing by a nose, as Faugheen rallied to be just another length behind an seal an Irish 1-2-3.

Elliott said: "Samcro is one of the favourites in the yard. Obviously he was in the doldrums for a while, so to get him back and win a Grade One in Cheltenham is something else.

"You can see how much it means to everyone in the yard. A lot of people have done a lot of work with this horse - they've spent day and night trying to get him right.

"He hasn't been scoping clean and it's been hard to get him to scope right. We've done a lot of different things, like building him a new stable, and he's pulled it off today.

"Everyone was knocking him, saying this and saying that. I probably even lost a bit of faith in him myself, but the horses are flying and I just can't believe it."

He added: "I am a bit of a pessimist, but I thought Melon had got us on the line, to be honest.

"He missed the second-last and Davy said that knocked the stuffing out of him. He jumped brilliantly apart from that.

"It was a great race to watch, with Melon, Faugheen and Samcro - that's what this place is all about."

Willie Mullins said of Faugheen, who has taken to fences with such aplomb late in his stellar career: "His following this year has been fantastic at home and now back at Cheltenham, where he has had some of his best days.

"He had trained and passed all his tests at home, winning two Grade Ones and a beginners' chase, and he had trained beautifully the whole way up and we left the decision to bring him over until the last minute.

"There was no reason not to bring him and we were hoping he would run a fantastic race one way or another and we are very happy with him." 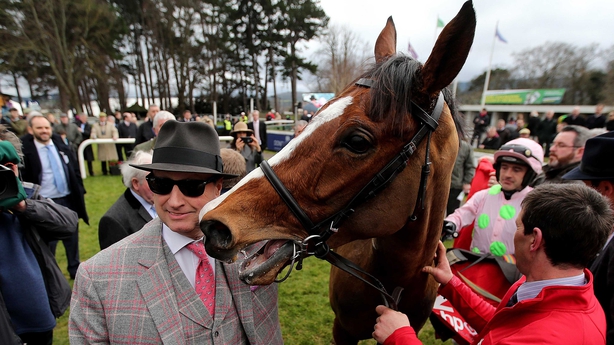 Proud owner Rich Ricci (pcitured above with the horse) said: "It was lovely. He was magic and has never jumped as well as he did today. I think if he had pinged the third-last he might have won, but it was a great run by Samcro and great to see him back.

"It was a hard decision to run him here, we are in the shop window of racing and you consider all things, as he is 12, but I'm delighted we did as the reception here was magic and he ran a stormer.

"He has been working the house down at home and you could see today that was some performance. If he pings that fence he is right there.

"I don't know (what happens next), it is a good question. We've got the Punchestown back in Ireland and I think the Irish would like to see him once more time, so if he is fit and well and ready to rock we will probably call it a day then.

"I'm not sure we will come back for the Gold Cup next year at the age of 13, but we will see what the horse tells us."

Of Melon, Mullins said: "He ran a fantastic race, and that's the fourth second in a Grade One he has had here. The cheekpieces have definitely helped his jumping, as he was gaining lengths with his jumping and on the whole it was very good.

"Hopefully he might race in the big one (Gold Cup) in the future, as he jumps and stays."