Easysland denied dual Grand National hero Tiger Roll a fifth Cheltenham Festival success as he ran out an impressive winner of the Glenfarclas Chase over the cross-country course.

Tiger Roll was sent off the 8-11 favourite to win the race for a third successive season for Gordon Elliott and Keith Donoghue, but on this occasion he found a rival four years his junior too sprightly.

Bought by JP McManus after winning over the course in December, Easysland (3-1) had since won at home in France for trainer David Cottin.

Ridden by Jonathan Plouganou, he was never far from the pace - but did take the odd chance at a few fences, jumping low.

Tiger Roll was given every chance by Donoghue, but the 10-year-old could never quite reel in the long-time leader and once the result looked inevitable, he was allowed to coast home in his own time, with the front two well clear.

Easysland crossed the line 17 lengths to the good, with Out Sam (33-1), a stablemate of Tiger Roll, a further 18 lengths away in third.

Donoghue jumped off Tiger Roll on crossing the line, and after being given plenty of water he was perfectly fine, walking back to the stables having been unsaddled.

Another old favourite, Might Bite, travelled well for a long way before dropping away on the final circuit.

The win provided McManus with a third of the afternoon thanks to Champ and Dame De Compagnie.

Despite the reverse, there were many positives to take for Tiger Roll and his connections, on what was just his second start of the season.

Elliott said: "We are happy, but once he is OK in the morning that is the most important thing.

"You're always disappointed when you don't win, but I said before the race the ground was a big worry. Keith said on that tacky ground he was never happy on him. On the better ground he was good.

"In fairness to the winning jockey he gave his horse a very good ride and took the sting out of us, we went a good gallop the whole way. Just the ground killed us, no excuse.

"If you go through his whole career he is a horse that needs good ground.

"When you're watching a race you're always hoping, but you could see going out on the last circuit across the heavy ground normally he'd be running way at that stage.

"But he's come a long way - in January we were only back cantering, so we're happy.

Donoghue said: "I'm very happy. The ground was very heavy and we knew that was going to be a worry, as he doesn't have good form on heavy ground.

"That just took the toll on him in the last couple of furlongs and I couldn't go with the winner, who was a very good winner on the day. He is a very good horse.

"He felt very good, just the ground got him beat."

Of the winner, Cottin said: "I was expecting a good run from him, as he seemed really well. His coat had changed and he was in great form. It is a big advantage to come here in December and to know the track. He did well in December and he won then.

"The heavy ground was going to be in his favour. He is a horse that is extremely well balanced, that easily follows and can go in that ground easily.

"When you have a cross-country horse you have to train them when they are young over those jumps and we have been very patient with him - we have given him a lot of time to get him where he is now." 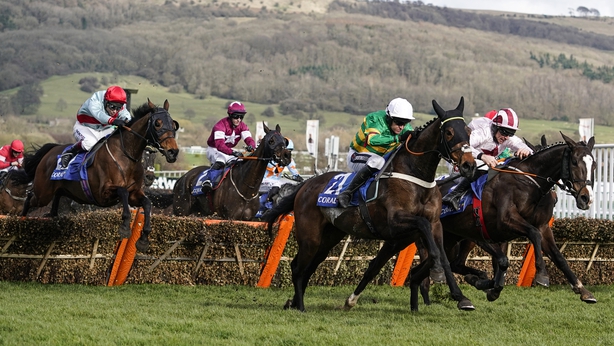 Dame De Compagnie justified strong market support in the Coral Cup to continue a golden start to the  Festival for Barry Geraghty and Nicky Henderson.

With three Grade Ones already in the bag courtesy of Shishkin, Epatante and Champ, Henderson showed he is just as adept at getting one ready for a handicap.

The unexposed mare was sent off the 5-1 favourite on the back of an easy win in December, a race that later saw Henderson appeal the fact she was put up an extra 2lb due to collateral form. The panel found in his favour and she was allowed to run off her initial rating.

Henderson said: "There is a long way to go to go, but you are getting into the realms of, 'I don't believe it' type of thing. You certainly couldn't believe Champ.

"She is a lovely mare this and she is tough. It is always a very competitive race, but she was very good. There wasn't that head-long Coral dash you normally get with a lot of horses flat to the boards, there were a lot of horses travelling and coming down the hill - anything could have won.

"To be fair we thought we had reasonable grounds to appeal and we did win it, but I'm not going to harp on about that as I don't want that to be the headline news.

"The handicapper thought (her rise) was fair, we thought it was a bit unfair and it saved us a couple of pounds which was probably quite important.

"In that sort of field you have to have a bit of luck and you have to be in the right place at the right time to get the breaks. She was good enough and she had the gears as well.

"She is a lovely, big mare and she would jump a fence, but she is tough and I think that is the main thing, you have to be in races like that." 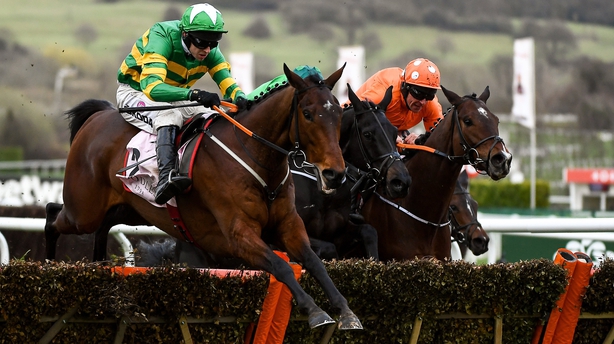 In what was a red-letter day for McManus, Aramax landed the Boodles Juvenile Handicap Hurdle.

Trained by Gordon Elliott, Aramax (15-2) was providing Mark Walsh with a first winner of the week.

He suddenly appeared on the scene travelling very powerfully running down to the second-last flight - but had to be tough at the finish, as David Pipe's Night Edition (16-1) was produced with a timely run by Tom Scudamore, going down by a length. Saint D'oroux (14-1) was third, Recent Revelations (14-1) was fourth and Clemencia (66-1) was fifth.

Elliott said: "I was very happy, Mark had a lovely bit of room the whole way and he jumped and did everything right. I was worried about the ground, but it is nice to win the race.

"This is a nice horse, that is going forward and the right way. We thought it was the right race to go for. He just does what he has to do, but we are very happy as he has won the race."