Albigna will break new ground for Jessica Harrington when she becomes the trainer's first ever runner at the Breeders' Cup on Friday.

Having represented Ireland at European, World and Olympic level during her days as a three-day event rider, Harrington has since established herself as one of the sport's great dual-purpose trainers during a career spanning 30 years.

She is the most successful female trainer at the Cheltenham Festival, where her triumphs include two Queen Mother Champion Chases with the mighty Moscow Flyer, a Champion Hurdle with Jezki and the Cheltenham Gold Cup with Sizing John.

In the last couple of years in particular Harrington has become increasingly potent on the Flat - claiming her first Classic success with Alpha Centauri in last season's Irish 1,000 Guineas and saddling almost 30 two-year-old winners in 2019.

Albigna has very much been of the show the star of the show this term - winning two of her first three starts and proving a disappointing effort in the Moyglare Stud Stakes was merely a blip when claiming top-level honours in the Prix Marcel Boussac in Paris.

Harrington has returned to California for the first time since taking part in the 1984 Olympics in Los Angeles, and is delighted with how Albigna has taken the long journey from Ireland.

She said: "Albigna travelled very well and is very relaxed. She arrived here in good form, has eaten up and did a little walk around the parade ring and saddling boxes just to help get her acquainted with her surroundings.

"This is my first Breeders' Cup runner, even though I was here when the Breeders' Cup started for the Olympics in 1984. It's a lovely place, that hasn't changed, and it's great to be back." 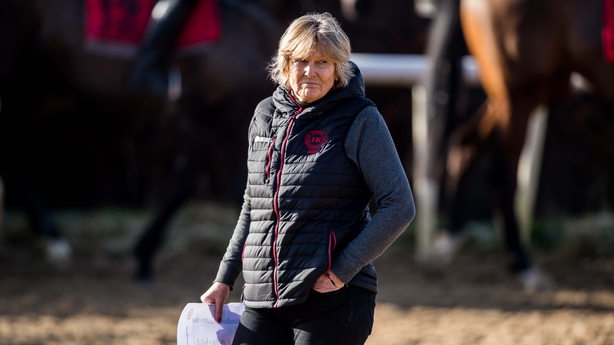 Albigna is one of seven European challengers in a 14-strong field for the Juvenile Fillies Turf.

Aidan O'Brien saddles Tango and Etoile, his son Joseph is represented by Unforgetable, while British hopes are carried by Karl Burke's Living In The Past, Shadn from Andrew Balding's yard and the Roger Varian-trained Daahyeh.

The latter has won the Albany Stakes at Royal Ascot and the Rockfel at Newmarket this season and steps up to a mile for the first time.

Varian told Sky Sports Racing: "She's got a good profile for the race and we've been thinking about coming here for some time.

"She has some of the best two-year-old fillies form in Europe and if she can translate it to the mile, racing round bends for the first time, she looks to have a strong chance on paper."

There is also a strong raiding party in the Juvenile Turf Sprint, headed by the Simon Crisford-trained A'Ali.

The son of Society Rock has already won the Norfolk Stakes at Royal Ascot, the Prix Robert Papin at Deauville and the Flying Childers at Doncaster and connections are hoping he can crown his tremendous campaign with victory in America under Frankie Dettori.

Ed Crisford, assistant to his father, said: "He doesn't have the best draw (10 of 12), but they will go very quick and Frankie is the best man to have on board.

"He has a really good turn of foot, which he has displayed in most of his races, but he couldn't do that in the Prix Morny as it was testing ground over six furlongs and he really is a five-furlong horse.

"Over five he must be one of the best two-year-olds in the world, but it is his first time round a bend in a race. To get him ready for that we took him to Wolverhampton, where he handled everything really well - changing his leads and showing the balance that he needs."

Wesley Ward has a formidable hand with Kimari, Four Wheel Drive and Cambria all serious contenders.

Arizona - winner of the Coventry Stakes at Royal Ascot during the summer - is the clear first string after placing behind the brilliant Pinatubo in the National Stakes and the Dewhurst on his last couple of starts.

O'Brien said: "Arizona is out a little wider than I would have preferred (12 of 14), but I think this ground is going to suit him and his form with Pinatubo in the Dewhurst is a strong factor to take into the race."