Magical and Addeybb are among nine runners declared for the Qipco Champion Stakes at Ascot on Saturday.

The William Haggas-trained Addeybb earned his return to the highest level with an impressive display in the Rose of Lancaster Stakes at Haydock in August.

Any cut in the ground at the Berkshire circuit will suit the confirmed mud lover.

Aidan O'Brien's Magical sets the standard following another excellent campaign, during which she has struck Group One gold in the Tattersalls Gold Cup and the Irish Champion Stakes.

She has also filled the runner-up spot behind her familiar rival Enable in the Coral-Eclipse and the Yorkshire Oaks, and was last seen finishing fifth in the Prix de l'Arc de Triomphe little under a fortnight ago. O'Brien also saddles I Can Fly.

John Gosden sent out Cracksman to win this prize in each of the last two seasons and this year fires a twin assault.

Coronet bids for a Group One hat-trick under Frankie Dettori following summer triumphs in the Grand Prix de Saint-Cloud and Prix Jean Romanet. She is joined by Robert Havlin-ridden stable companion Mehdaayih, who has something to prove after disappointing in the Prix de l'Opera at the start of the month.

Deirdre became just the second Japanese-trained Group One winner in Britain when claiming the Nassau Stakes at Goodwood in early August, since when she finished a luckless fourth behind Magical in the Irish Champion.

Ante-post gamble The Revenant heads a field of 16 in the Queen Elizabeth II Stakes as his rider Pierre-Charles Boudot bids for another big-race success.

The Revenant, who is trained by Francis Graffard, provided one of those wins in the Prix Daniel Wildenstein and he arrives at Ascot having triumphed in his last six outings.

Saeed bin Suroor's Benbatl is another leading fancy after a stylish victory in the Joel Stakes at Newmarket.

That was his first run since being beaten by Winx in Australia last October, but Bin Suroor has stated the heavy ground will not be in his favour.

Course specialist Lord Glitters represents David O'Meara. The grey won the Queen Anne at the Royal meeting back in June and also won the Balmoral Handicap on this card two years ago.

O'Brien's 2000 Guineas winner Magna Grecia will have his first outing since the Irish Guineas in May, when he finished fifth.

The winner that day was Charlie Hills' Phoenix Of Spain, who reopposes here, but he has been winless since that Classic verdict.

King Of Change, second to Magna Grecia in the Newmarket Guineas, runs for Richard Hannon while Marcus Tregoning's Mohaather, who was ruled out of the Guineas after winning the Greenham, has his first run for almost 200 days.

Jim Crowley will be on board and he told Sky Sports Racing: "He was really impressive when he won the Greenham. I've been down and ridden him work, he's going well and he likes soft ground.

"It's a big ask going for a Group One race, but he's fit and well, so hopefully it will go well.

"One thing we do know is that he handles soft ground and there aren't too many options for him.

"He's done plenty of work on the grass and hopefully he'll run a nice race." 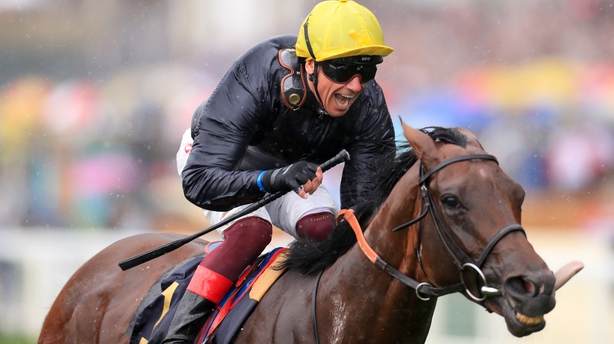 Stradivarius will face nine rivals as he bids to extend his winning run to 11 in the Qipco British Champions Long Distance Cup.

Gosden's top-notch stayer has been in a league of his own since he last tasted defeat in this race two years ago.

He won this contest 12 months ago and is set to go again, as long as trainer John Gosden is happy with track conditions when he walks the course on Saturday.

Gosden has a second string to his bow in September Stakes scorer Royal Line while Bin Battuta, Cleonte, Mekong and Withhold complete the home contingent.

O'Brien is staging a three-pronged assault with Capri, Kew Gardens and South Pacific while Max Dynamite, trained by Willie Mullins, completes the field.

Dee Ex Bee, runner-up to Stradivarius three times this season, was one of the four withdrawals at the 48-hour final declaration stage along with Pilaster, Delphinia and South Sea Pearl.

Anapurna and Star Catcher, winners of the English and Irish Oaks respectively, give Gosden a formidable hand in the Qipco British Champions Fillies & Mares Stakes.

Both have shown their well-being recently, with Star Catcher taking the Prix Vermeille on her last start and Anapurna the Prix de Royallieu.

O'Brien is responsible for four of the 10 runners - Delphinia, Fleeting, Pink Dogwood and South Sea Pearl - while Dermot Weld provides the other Irish-trained runner in Tarnawa.

Make A Challenge is doing just that for Irish trainer Denis Hogan after being supplemented for £40,000 following an impressive victory at the Curragh on Sunday.

Others in the mix include Brando, Cape Byron, Donjuan Triumphant, Dream Of Dreams and Mabs Cross.

The Gosden-trained Lord North, emphatic winner of the Cambridgeshire, tops the weights for the Balmoral Handicap for which a maximum field of 20 was declared, plus three reserves.